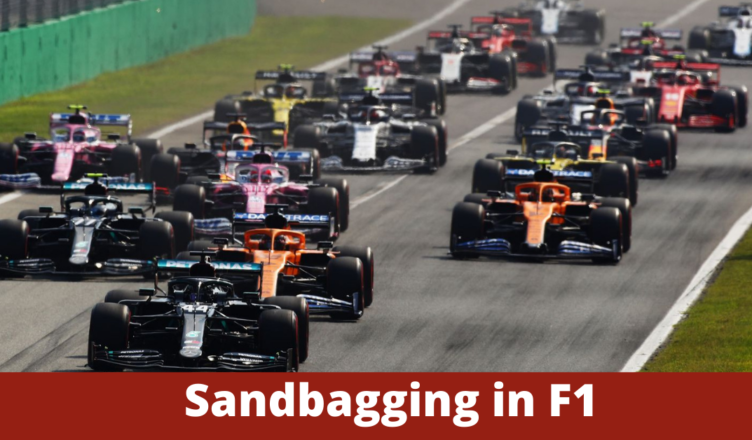 I have truly been enjoying F1 racing and the fights between teams like Mercedes and Red Bull lately. Formula 1 is the ultimate racing sport where strategists for different teams engage in shadow boxing. They use all tricks available to them to defeat their rivals. One such trick is sandbagging. And you might ask; what is sandbagging in Formula 1?

In his book, The Art of War, Sun Tzu wrote;

It is a quote that has become very popular with strategists.

Formula 1 racing is a sport where winning or losing is by very close or thin margins. You are talking of seconds.

In this case, a team must do all they can and execute their strategy with military precision. For example, you have witnessed how Red Bull team is able, in 2021 season, to have very smooth pit stops.

On the other hand, you have also seen Mercedes make some mistakes at the pit stop. This includes the now famous longest pit stop in F1.

Since all warfare is based on deception, the teams employ the tactic of sandbagging to trick their rivals.

Why would anyone pull such a trick and what exactly is sandbagging in formula1?

What is Sandbagging in Formula 1?

In F1, sandbagging is a tactic where a team deliberately under performs in testing to hide the true extent of the capabilities of their car.

You might be forgiven to imagine that a Formula 1 team is implementing Sun Tzu’s law when sandbagging.

The idea is to ensure that rival teams do not see how their car performs. When you are unaware of the true pace of your rival’s car, you cannot be able to create counter strategy.

A famous example of this is the double-diffuser in the 2009 Brawn GP. They were so quick in pre-season testing that they had to insert ballast inside their car to slow it down with more weight.

Is Sandbagging in F1 Cheating?

If you are to think about it, sandbagging in Formula 1 is a form of cheating. It is deception at it’s best.

Cheating is defined as “act dishonestly or unfairly in order to gain advantage.” Based on this definition, you can argue that sandbagging is a dishonest act carried out to gain a competitive advantage.

Therefore, it is cheating.

What does it mean when someone is Sandbagging?

Sandbagging is a term that can have other meanings outside of formula 1 racing.

When you say you will ‘sandbag someone, you are basically saying you are going to trick or bully them into doing something.

It is also possible to use the word sandbag as a verb. In this case, it would either means to protect with a sandbag or to deceive or coerce someone to get something you want.

As you can see, if you are just looking at what is sandbagging in formula 1, you would not get the other ways this term can be used.

There has been a great deal of debate as to whether Mercedes Team are sandbagging, and especially in 2021.

This issue started with pre-season testing in Bahrain.

Testing did not go the way team Mercedes would have wanted, and it has raised the question of whether not doing enough test runs is hurting them in this season.

While Mercedes is still performing relatively well, and competitively, their car is still lagging behind Red Bull’s car, which is the season’s favorite.

The fact that Red Bull performed very well at Paul Ricard circuit in France is an indication of how close the championship battle will be this season.

In my opinion, I do not think Mercedes are sandbagging. They are truly lacking in pace compared to Red Bull, and have admitted as much.

However, you cannot truly write them off. The team has demonstrated in the past that they can overcome challenges when they stumble.

It will be very interesting to see how they progress over the next couple of races.

Why Everyone Thought Mercedes F1 Team was Sandbagging

Mercedes has been the team to beat in the last couple of seasons. They have personified dominance in the turbo-hybrid era.

It was therefore shocking to see the team struggle during pre-season testing.

Usually very mileage-heavy, they bagged the fewest laps of anyone this time round in 2021. Yet despite all their troubles, some believe that they were ‘sandbagging’.

At this point, a few races have taken place, and while they still have a very good and fast car, they seem not to have gotten to the ‘sweet spot’ with the car this season.

This label of sandbagging has stuck to Mercedes in 2019 when they were outperformed by Ferrari in pre-season testing.

However, they went on to win the first 8 races of the season! So, that might make you wonder if they are repeating the trick with Red Bull this time.

In 2022, the same stuff is being said about Mercedes, that they were sandbagging during pre-season testing in Bahrain.

What are your thoughts…do you think Mercedes are sandbagging?

What is Sandbagging in Formula 1 Racing

Sandbagging is a term that is borrowed from horse racing. It refers to the practice of intentionally playing badly so as to not show your real capabilities.

In F1 racing, it means you are fooling your competitors by making them think you are worse off than them. This gives them a sense of comfort, not knowing that you are deploying a deceptive tactic.

In formula one, this tactic is used during pre-season testing as well as during the pre-races testing.

What is the difference between Glory Runs and Sandbagging in Formula 1?

The terms glory runs and sandbagging are common in formula one racing.

This is a tactic where a team sends out their car as light as possible with the objective of achieving the fastest time laps.

The idea here is to catch the eyes of the sponsors.

One of the most famous examples is Jean Alesi’s eye-raising testing performance for the Prost team in 2001 pre-season testing.

This is the practice of deliberately running below your maximum potential to disguise your car’s actual performance.

What’s the point in sandbagging in formula 1?

At this point, you might be asking yourself; why would a team go to such great lengths to sandbag?

The point in sandbagging in Formula 1 is very simple.

It is because that some teams prefer to let their cars go under the radar. They do not want to raise un-necessary eye-brows.

They might have come up with a special component on their car that gives them a key advantage over the rest of the grid and they wish to keep that under the wraps until race day.

For example, many think that Mercedes were sandbagging during the 2022’s pre-season testing in Bahrain.

Mercedes drivers have refuted those claims, saying they are not bluffing.

In conclusion, sandbagging in formula 1 is an interesting idea. It plays the role of a deceptive tactic to give one team an advantage over others.

I do hope that this resource has helped you get an answer to your question of; what is sandbagging in formula 1?

Winning a championship is very important to a formula one team. It helps in the team’s effort of securing sponsors for the subsequent seasons, and also helps a team make money including the prize money at the end of a season.

As you can see, there are reasons why a formula 1 team might consider sandbagging.