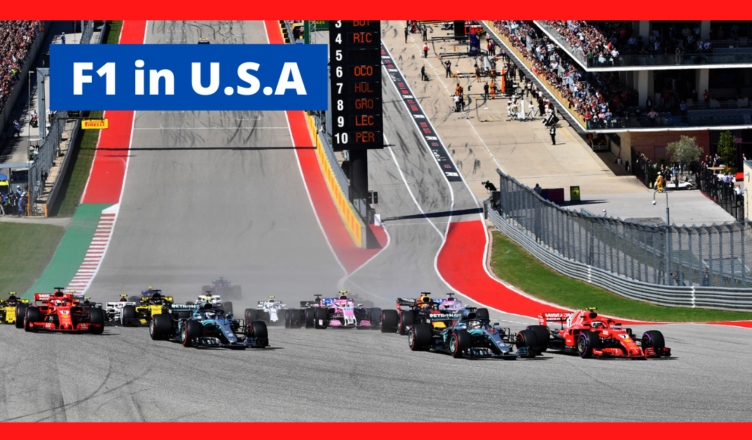 United States of America is known for many things. There are several sports that are really popular in the country. Formula one is one of the sports. It has had a rich history in the US. What you might really be interested in knowing is; how big is formula 1 racing in the USA?

That is what this resource is aimed at helping you understand.

Formula 1 racing in the USA is not very big in terms of both revenues and viewership at the moment.

However, with a population of above 325 million people, the US provides a huge growth opportunity for the formula one sport.

It is an idea that F1 has taken up, and are taking steps to promote the sport in the country.

For example, starting 2022, the country will host two f1 racing events. The two are the Circuit of the Americas in Austin, Texas, and the new addition, Miami Grand Prix.

How Big is F1 Racing in the United States?

When it comes to how big F1 is in the US, there are about 47 million formula one fans of the Drive to Survive series on Netflix.

This is according to a recent study by Nielsen. The study indicated a significant growth among viewers aged 16 to 25.

That is a sizable fan base, with opportunities to grow.

In USA, formula I racing has been held 49 times and in 10 different venues.

To help you understand the US Grand Prix, it is important to have knowledge or information about the race at the Circuit of  the Americas (COTA)

As you can see, the details above provide you with a sneak view of what constitutes the F1 race in Austin, Texas.

How Big is F1 Racing in the United States?

In order to fully understand how big formula one is in the US, you should consider the following factors.

F1 in the US is growing. The future looks bright and it is possible more races will be hosted in the country.

Understanding How Big F1 is in the United States

While you might not understand the technical aspects of F1 racing, it is possible that you enjoy the races.

I can tell you that for me, it is impossible to miss the race on a weekend. You will find me glued to the television or my smart phone watching the live feed of the race.

In my experience with formula one, I have found that the level of interest of F1 is not as high as expected in the US. This is true if you compare the US and the European markets.

While US is big with automotive industry, formula one is not as big. And there are several reasons why F1 is not popular in the US. You can read them below

Related: 7 Reasons Why F1 is Not Popular in the United States.

F1 is different than most US racing from a cultural perspective. Formula one is about cutting edge state of the art technology, much more than the idea of a good old fashioned car race.

For fans who know nothing about why a car works or how hard it is to drive an F1 car, F1 is not going to appear very exciting.

However, you can be sure that in the US, the sport is growing and becoming bigger.

With two races on the calendar now, it will continue to increase in popularity.

Is Formula One Growing in the US?

Formula one has been growing in the United States over the last couple of years.

A number of things are happening that are creating interest in formula one. One of them is the new venues or countries that sport has been over the last two seasons.

Another important aspect, especially in United States is the Drive to Survive series. It has brought new fans into the sport.

The investment that is being made into promotion and marketing is paying off.  It includes activations such as VIP events in Los Angeles and Miami.

With Miami GP on the F1 2022 calendar it is a great signal that F1 is considering US market as an important part of it’s growth.

As part of their efforts to increase and grow formula one in the United States, the management and promoters have been organizing festivals across the US.

It is possible you have seen drivers like Valtteri Bottas of Mercedes F1 team, and Sergio Perez of Red Bull showcasing their skills on the streets.

This is part of the efforts of F1 management to make F1 bigger in the United States.

F1 has hosted several festivals and closed events. These are activations meant to entertain current and potential fans in the US.

It is part of the larger marketing efforts aimed at growing the presence of formula one in the US market.

So, while F1 is not very big in USA right now, steps are being taken to increase the popularity of the sport in the country.

In conclusion, formula one racing in the United States is on the rise.

It is estimated that Miami GP is going to contribute about $400 million in revenue every year. That is a positive thing to the Miami ecosystem.

From the above it is clear that how big formula 1 racing is today in the USA is a reflection of past activities.

To be able to grow the sport’s popularity, a lot of work should be done. It is going to include more races, increased marketing and probably to find a way to have an American driver on one of the teams.

Compared to European market, formula 1 racing is not very big in the USA. You might even consider it to be in the nascent years of growth.