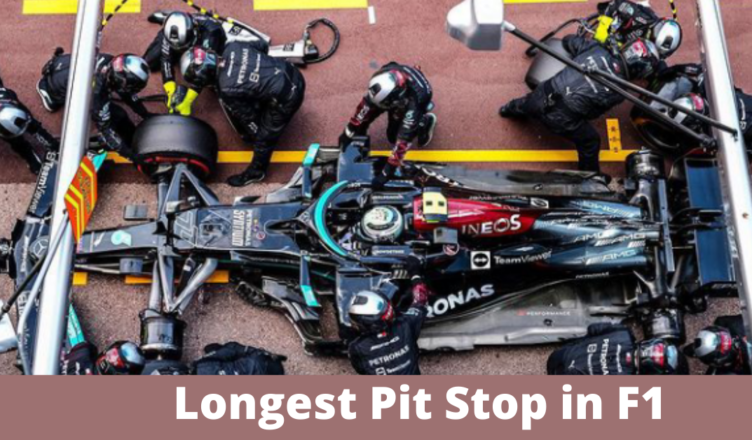 Watching a formula one race is very interesting, especially if you are fun of the sport. For me, I look at formula one racing from a sport point of view as well as from a business point of view. Lessons I can learn from it as an entrepreneur. One of the questions I am trying to ask myself today is; what is the longest pit stop in F1?

Pit stops have a long history in formula one. But what exactly happens at the pit?

It is pretty simple. The car pulls in from one end, and pulls out in the other end. By the time it pulls in and stops, it gets lifted about 4 inches above the ground.

The pit stop crew removes all four tyres and fit in four new tyres. They will check the driver, clean the visor and water among other items. Then they will drop the car and the driver will take off.

In 1950s, the fastest pit stop was about 4 minutes and 39 seconds. Today, you will be amazed to find that Red Bull is having a sub 2 seconds pit stop.

What is the Longest Pit Stop in F1

There is this idea within the formula one circles that Mercedes F1 team usually has one major failure per season. You can look back over the last couple of F1 seasons and you will see the trend emerging.

While you might agree or disagree with me, you will at least agree that Monaco Grand Prix in 2021 was their most catastrophic one.

The botched pit stop of their car No.77 of Valtteri Bottas has earned them a place in history books as the holders of the longest pit stop in F1. I do no think they intended to break this record.

Mercedes is one of the wealthiest f1 teams today. it is not a wonder that much is expected of them. But do you know how formula one teams make money? I have created a comprehensive resource, which shows you how F1 makes money.

What really happened in Monaco for team Mercedes?

I know you are wondering why or how this ended up being the longest pit stop in F1 history.

There are various ideas and explanations of how Valtteri Bottas ended up suffering his first 2021 DNF at the Monaco Grand Prix.

This is what happened as explained by Mercedes Strategist James Allison.

Allison explains again exactly what went wrong at the pit stop. “If we don’t put the wheel gun right on the nut, it can grind away the surface of the nut. It’s a bit like using a Phillips screwdriver not sitting straight on the crotch of the screw. The slots of the screw head are then ground away, after which it is simply impossible to get a screw out. You no longer have a surface for the screwdriver to grab onto.”

“The same thing can happen with our wheel nuts when the wheel gun starts turning and grinding away the surface of the nut,” the Mercedes chief continued.

“Looking at the power of the wheel gun, you end up with a blunt surface and the screw is turned crazy, until the drill head has nowhere to grab onto. That happened at the pit stop.”

Most expert’s initial reaction was that it had been caused by a ‘cross-threaded’ wheel nut, something that DIY experts will be familiar with.

At the point Valtteri Bottas came into the pit, he running second behind Max Verstappen.

However, his bizarre longest pit stop in formula one ensured he retired from the race. This hurt the Mercedes F1 team as by the end of the race the team lost both driver’s and constructor’s championship title lead to Red Bull.

In what could be an interesting turn of events, Mercedes F1 team holds the record, so far, of the fastest pit stop in the 2021 season.

The fastest pit stop in 2021 is 2.24 seconds and was set at Emilia-Romagna in Italy by Mercedes F1 team.

As the 2021 F1 season progresses, this will likely change. I can promise you that I will let you know who ultimately will be the holder of this record this year.

As you can see, the evolution of pit stop is something you are going to really admire.

However, ability to be able to execute a smooth pit stop remains one of the greatest challenges to both the drivers and the teams.

In some cases, races or even championships are being decided during the pit stop.

A good example of this was the strategy call to Lewis Hamilton to pit for fresh rubber at the Circuit de Barcelona-Catalunya.

This creative strategic thinking, on lap 43 allowed Lewis to pass Max Vestappen with six laps to go, and claim the victory.

To me, this is usually one of the most interesting things to watch.

The reason is simple. Pit stop brings the best out of the F1 teams and their ability to perform together.

In general, all teams are doing well during pit stops.

However, Red Bull is turning out to be the winners of the pit stop act. The team has been doing sub 2-seconds pit stops.

Red Bull Racing holds the current world record for the quickest pit stop, with a 1.82 second stop performed at the 2019 Brazilian Grand Prix.

It was performed on Max Verstappen’s Red Bull racing car.

Now, here are some of the top three pit failures in F1 history.

This one proved to be costly for Felipe Massa’s 2008 title fight.

At the Singapore Grand Prix Ferrari was using a traffic light system in the pits, but there were a few issues with it, as shown when Massa was told to go while the fuel hose was still attached.

A few mechanics went flying but were okay, but it cost the Brazilian driver a potential win and points in the championship battle, which he eventually lost by one point.

The fuel sprayed out of the nozzle as the hose was disconnected and ignited during the 1994 German Grand Prix, engulfing Jos Verstappen’s Benetton in flames.

The driver suffered only minor burns to his nose, as he opened his visor slightly during the stop.

You don’t often see drivers colliding in the pits, but Robert Kubica and Adrian Sutil managed to hit each other at the 2010 Hungarian Grand Prix.

It was chaotic, with Kubica being released into the path of the Force India driver as he pulled into his box, which was directly after the Renault pits.

Sutil retired on the spot but Kubica continued for a few more laps before exiting the race.

In conclusion, I am sure that Mercedes F1 team will recover from the Monaco disaster. However, they will now continue holding the longest pit stop in formula one record. That is unless another team can break the record.

It is clear that what happened was not intentional. It was a mistake and it can happen to anyone of us.

In life, we make mistakes all the times. It is okay for you to make a mistake, What is not okay is tolet that mistake define you or your life.

As I mentioned, I think there are business lessons from what happens in formula one racing.

Every entrepreneur faces challenges.  While some are small, other business challenges might threaten to bring down your business. You should take heart in knowing that having a positive spirit will help you overcome the challenges.

It was great to see Valtteri training hard for the next race. This would be in Baku, Azerbaijan.

In recent years, over 50% of the pit stops have taken about 2.92 seconds or less. Let that sink in. It is more or less the time you have taken to read this sentence.

It is crazy, right?

This is what formula one is all about. Teams are working hard to innovate, surpass the limits and move forward.