Over the last couple of years, I have taken a keen interest in the world of motor sport, and with a particular interest in formula one. It is a term that meant very little to me when I was growing up on the slopes on Mt. Kenya. It is good to start from the basic. So, what is Formula one racing?

If you are a fan or a keen follower of motor racing, then you have also come across the term formula one. This is what I would like us to further look into. I decided to research to help you understand what formula one means and how it works.

The moment you get into the world of motor racing, the first question you ask is; what is formula one in motor racing?

What is Formula One racing?

Formula One racing or F1 is the top most level of international single-seater auto or motor racing sport.

It is a sporting activity governed by the FIA – Fédération Internationale de l’Automobile or the International Automobile Federation, where 10 teams, comprising of two drivers each compete on a series of races over a one-year period or season to determine the ultimate driver and constructor champion.

The name ‘Formula’ comes from the set of rules that the participating teams and drivers must observe.

The purpose of Formula 1 racing is to determine the winner of a race. The driver who crosses the finish line first after completing a pre-determined number of laps is declared the winner.

Why is Formula One racing so named?

The name ‘Formula’ comes from the set of rules that the participating teams and drivers must observe in this sport.

What is Formula One – History and Team Size

Formula 1 racing originated during the 1920-30s in Europe from other similar racing competitions. In 1946, the FIA standardized racing rules and this formed the basis of Formula One racing.

The inaugural Formula One World Drivers’ championship was then held in 1950, the first world championship series.

Apart from the world championship series, many other non-championship F1 races were also held, but as the costs of conducting these contests got higher, such races were discontinued after 1983.

Each F1 team can have maximum of four drivers per season. There is support staff with every F1 team that plays a vital role in the team’s success.

What is Formula One? – Participating Countries

A series of Formula One races are conducted over a period of time, usually over a year called the ‘Formula One World Championship season’.

Each race in a season is called a ‘Grand Prix’ or GP and all the races in a season combined are called ‘Grands Prix’ which is plural of Grand Prix.

The term ‘Grand Prix’ is derived from French which means ‘great prize’.

Number Of Grand Prix in a Season

The number of Grand Prix in a season has varied through the years, starting from 1950 which had 7 races.

The 2020 F1 season has 17 Grand Prix, due to the global crisis experienced in the year.

The minimum total distance of a Grand Prix race, including all the pre-defined number of laps must be 300 km or 190 miles. This is the standard distance for all races except for the Monaco GP which is 260 km or 160 miles.

10 teams with two cars each are permitted to compete in the F1 World Championship as of 2020. That is, a total of 20 cars can enter the competition. However, the FIA regulations allow a limit of 26 cars for the championship.

The results of all the Grand Prix races in a season are taken together to determine two annual Championship awards. They are;

What is Formula One Racing – Car Design, Specs, Rules

A Formula One car is an open-wheel, open-cockpit, single-seat racing car for the purpose of being used in Formula One competitions. It is equipped with two wings, front and rear, plus an engine, which is located behind the driver.

Every F1 car is composed of two main components − the chassis and the engine.

Chassis − Formula One cars these days are made from carbon fiber and ultra-lightweight components. The weight must be not less than 702 kg or 1548 lbs, including the driver and tires, but excluding the fuel.

The dimensions of a Formula One car must be maximum 180 cm (width) × 95cm (height); there is no specified number for maximum length, but all cars tend to be of almost the same length.

Engine − According to regulation changes in 2014, all F1 cars must deploy 1.6 liter turbo-charged V6 engines.

A Formula One race starts with a warm-up lap, called the formation lap and the pit lanes are opened of this purpose 30 minutes before the actual race begins. Pit lanes are tracks away from the grid and are parallel to the start/finish line.

During this time, the drivers are free to take any number of warm-up drives, without actually going on the grid. After the pit lane closes, the drivers must take their places on the grid in their qualifying order.

Once all the cars have taken their positions on the grid, the race begins with the starting lights − 10 red lights in 5 pairs of columns.

Each column lights one after the other, at an interval of 1 second from left to right direction. After all 5 columns are illuminated, they stay in that way for a few seconds and then all of them are extinguished at once and the race begins.

If the start is interrupted due to any circumstances, the 5 red lights illuminate again but are not extinguished, instead orange lights are lit up and the race is restarted.

The drivers who finish at first, second and third positions at the end of the race stand on a podium and are awarded trophies. A constructor’s trophy is also presented to the winner’s team.

The length of the race must be 305 km (260 km in case of Monaco GP) and is defined as “the smallest number of complete laps that exceeds 305 kilometers”.

The number of laps in a race is obtained by dividing 305 by the length of a lap, which differs from track to track.

The duration of the race cannot be more than 2 hours. If the allocated time of 2 hours is exceeded, the race is considered to be finished at the end of the ongoing lap.

However, some cars, without fully complying with F1 standards have attained speed of 400 kmph or more. These numbers are mostly same for all F1 cars but slight variations may be there due to the gears and aerodynamics configuration.

What is Formula One Safety Gear?

Safety is high priority in motor sports. Formula One has seen many tragedies in its early days with many casualties that included drivers and spectators as cars crashed at high speeds.

Engineers researched using latest technology to build safer cars and gear for drivers. This has certainly reduced the number of incidents over the last decade.

Let’s know about the different safety gears used by drivers in formula one. 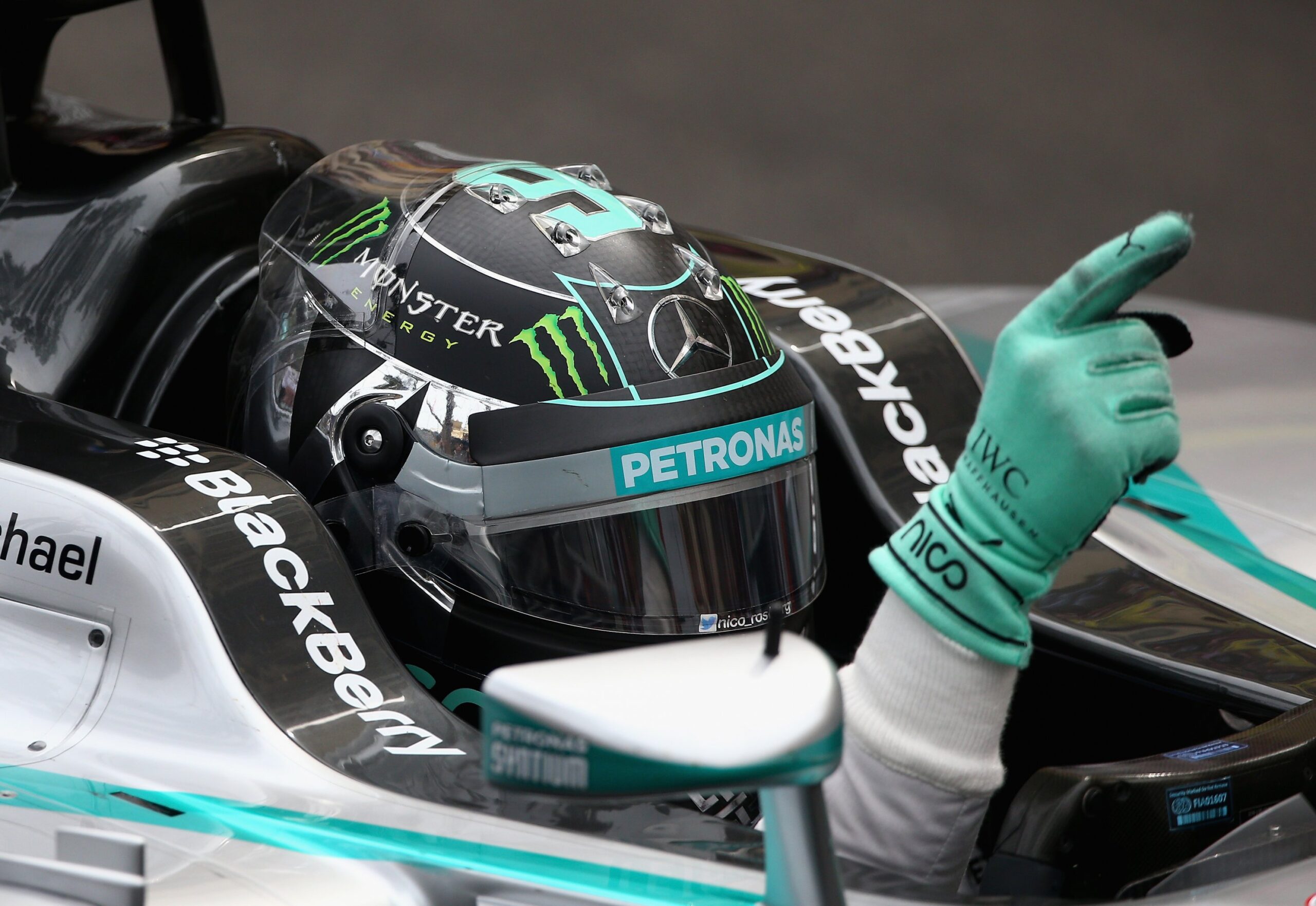 This chapter consists of all the popular terminology used in Formula One. It is to understand the language of the sport better.

107% rule − A driver should not exceed 107 percent of fastest time in qualifying session; if he fails to do so, then he is not allowed to start the race. He is allowed to start if he sets a suitable time during the practice session.

Backmarker − The drivers lagging behind are called backmarkers. They are shown blue flag to give way for leading drivers.

Blistering − Improper selection of tire compound can cause excess heat that can lead to chunks of rubber breaking off from the tire. This is called blistering.

Cockpit − The seating area of the driver in a F1 car is called the cockpit.

Delta Time − The difference of time between two laps or two cars is referred to as delta time.

Drive-through penalty − A penalty imposed for minor offence or violation of rules on track. It requires the driver to drive at a minimum speed and enter the pit lane without stopping. The driver is allowed to re-join the race.

Flat spot − The portion of the tire where it is heavily worn out due to spin or extreme breaking is called the flat spot.

Formation lap or warm-up lap − Cars are driven for a lap from the grid before the start of the race and then get back to grid positions. This is known as the warm-up lap.

Jump start − Sensors are installed at grid positions to monitor the cars that start before all the red lights go off signaling the start of race. Such start is called jump start and the driver earns a penalty for it.

Lollipop − The sign board at the pit stop that signals the driver to apply brakes and stay in first gear before the car is lowered from jacks.

Parc ferme − A restricted area where no team members are allowed and all race cars are driven here after completion of practice or race. This area is supervised by race stewards only.

Pit board − A board held at pit wall to inform the driver about delta time, remaining number of laps, and current position.

Pit wall − It is F1 team area where the manager, engineers, and support staff keep close watch on their cars using small screens under a shelter.

Pits − An area of the track separated by a wall. Cars enter team’s pit garage for change of wheels, refuel the car, and set up other changes.

Steward − A high-ranked official appointed for races to make decisions.

Tire warmer − An electronic blanket is wrapped around the tires before cars are positioned for race that keeps them at optimum temperatures before the start of the race.

Visor strip − The top edge of helmet needs extra protection and it is provided with a visor strip made of Zylon that is a high-resistant carbon fiber material.

The present system of Formula One World Championship points scoring was adopted in 2010 and has been continuing since.

According to this system, the top 10 drivers at the end of each Grand Prix will receive points based on the positions they finished and these points will contribute towards determining both, the World Drivers’ and World Constructors’ Championships at the end of the season.

Why do they call it Formula 1?

The name “Formula 1” has no relationship to any specific term, it’s a trade-marked fantasy name. The name was created to represent the idea that cars were built to a formula, differentiating it from the other series from the time that raced converted road cars.

What are the rules of Formula 1?

These are the 7 Rules Every Formula One Driver has to follow;

Why is Formula 1 so popular?

Money makes the world go around, and F1 racing is a sport that requires a lot of it. From the cars to the salaries of the drivers, money forms the backbone of the competition.

Thus, it makes Formula One produce a great show across the various countries that host the events.

Purchasing a Formula one car is an unattainable dream for most people that are into cars and have a need for speed.

The mere thought of owning such a monster is pretty much a fiasco for more than 95% of the population.

However, it is not completely off the table. If you have the finances, you can buy a luxury F1 car like a Ferrari or a Mercedes AMG.

Yes, F1 teams make money from various sources which include bonuses for winning the constructors’ championship, and for other competitive measures.

If you would like to understand this in depth, have a look at this resource that I put together on how F1 makes money. You will get all the details on the business of formula one.

Ferrari is the only team to receive an “LST” bonus, which stands for Long Standing Team, of $68 million for being with F1 since the get-go. The other revenue stream for F1 teams comes from the drivers themselves.