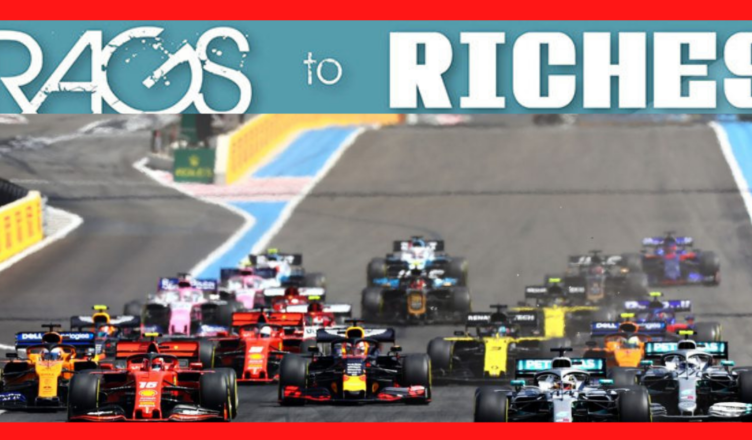 While formula one is one of the most glamorous motorsport, joining the sport is not for the faint of heart. It is an expensive sport. Some of the drivers in F1 have come from wealthy or rich families. Others have come from humble backgrounds. You might be wondering; who are the rags to riches formula 1 drivers?

This is something that I am also interested in. it is important to know F1 drivers who have worked hard, sometimes against many odds to reach to the pinnacle of formula one racing.

You would be inspired to hear the stories. To learn what it took for some of the current and former F1 drivers to get into the world of formula one racing.

It is a resource that is seeking to shed light on who are the rags to riches formula 1 drivers.

Who are the Rags to Riches Formula 1 Drivers

It is important to realize that not all F1 drivers are from rich families. Some of the drivers and their families have sacrificed a lot to be in this sport.

Some of the drivers who are from rags to riches in F1 include;

These drivers have demonstrated the power of hard work, sacrifice and determination in achieving success in F1 racing.

The rags to riches driver sin formula one should remind you that you can achieve greatness, even if your current situation does not look promising.

While there are many rags to riches stories of business leaders, this resource looks at formula one drivers.

You might not know it, but when Sebastian Vettel started racing, the family did not have money.

He struggled, and had to use old equipment to get competitive.

It was his father who sold his own hill-racing car to fund Sebastian. He took him to car shows to look for sponsors.

At one point in his early days, he had a Vodka logo on his coveralls. The family used to sleep on a family camping van when visiting karting races. That is how bad things were back then.

Today, Sebastian Vettel has enough money. He has earned his fortune and as 4-time world champion, he deserves it.

Another one of the rags to riches formula 1 driver is Kimi Raikkonen.

He is popular for his one-line responses to questions. However, he announced he would retire from formula one at the end of the 2021 season.

You will find that his story is very inspiring. His parents worked very hard to help him achieve his racing dreams.

It is worth noting that his father, Matt Raikkonen had to work at night as a taxi driver and nightclub bouncer to fund for Kimi’s racing.

This is very humbling to see that Kimi Raikkonen came from such a background to win the driver’s championship in 2007 as a Ferrari driver.

At one point his family has to postpone replacing the outside lavatory with a proper bathroom in their family home. This was because the money was diverted to Kimi’s karting.

As you can see, Kimi’s family sacrificed a lot to help him get into formula 1 racing. It is good that he as repaid them with a great career.

He has earned enough money today, and it is likely his family is not struggling today as they did in earlier days of his career.

With his exploits in the world of formula one racing, you might not believe that Lewis Hamilton is one of the rags to riches formula 1 drivers.

He does not come from a rich family, and they struggled to make his racing career take off.

Hamilton’s father actually worked day and night for many years. At one point, he held three different jobs to held fund his son’s racing dreams. He also lost his job for supporting Hamilton’s racing activities.

That is how far Lewis Hamilton has come. It is a story of rags to riches, a clear demonstration of how hard he has worked to become a multi-millionaire.

You should note that Lewis effectively started his career when he was given a old and used go-kart. It cost his family a lot of money to buy it.

Today, Lewis Hamilton is a world champion, having won over seven world drivers’ championship titles. It is a far cry from the young boy who started racing karts.

It is possible that Hamilton will go ahead and win his 8th drivers’ title, and some even feel he could win 10 championships.

As a world champion, Michael Schumacher does not appear like he has ever struggled in life.

However, his is a story of rags to riches formula one driver. It is very inspiring to learn and understand the journey to his successes.

Michael Schumacher was born to Rolf Schumacher and his wife Elisabeth. Rolf was a brick layer.

To start his son off, Rolf modified his pedal kart by adding a small motorcycle engine. Michael crashed it into a lamp post in their hometown of Kerpen.

Later, his father would build him a kart from discarded parts. This was because the family could not afford to buy karts for Michael Schumacher.

To support his son’s racing, Rolf Schumacher took on a second job renting and repairing karts, while his wife worked at the track’s canteen.

Nevertheless, when Michael needed a new engine costing 800 DM, his parents were unable to afford it; he was able to continue racing with support from local businessmen.

As the story would evolve, Michael Schumacher went on to win world championships in formula one. With it came riches and wealth.

Today, Mike Schumacher, who is Michael’s son, has joined formula one racing. He is driver with Haas F1 team.

This is a family story, of how a father and son struggled to join the formula one racing. Starting from the bottom and rising to the top of motorsport racing.

As some of the rags to riches F1 drivers in history, the Graham’s are an inspiring lot.

Graham Hill did not know anything about racing. It was worse that he could not afford to finance his racing habits. He could not even drive.

He struggled, bought himself a 1934 Morris and taught himself how to drive. It took a while be he eventually acquired a license to drive on public roads.

Graham worked his way into Lotus, and would get occasional race. He was very broke to the extent that his wife, Bette, paid for their wedding in 1955.

After Graham’s death on a plane crash, insurance claims wiped out all the family savings.

This meant the family had very little finances. It is a situation that would affect Damon Hill’s life.

Damon had to work as a labourer and as a motorcycle courier. His hard work won him a seat at the Williams F1 racing.

In conclusion, the rags to riches formula 1 drivers have worked hard to earn their rightful place on the grid.

Like everything else in life, being determined and working hard is going to bring you great success.

It is important to note that, while F1 drivers do not come from poverty or poor backgrounds, not all of them are from rich or wealthy families.

Related: Do All F1 Drivers Come From Rich or Wealthy Families?

A number of very successful formula one drivers have a great rags to riches stories.

You can consider them to be people who are the rags to riches formula 1 drivers of the past and today.

These guys have been able to achieve great success in one of the costliest sport in the world.

For a sport that has drivers who come with huge sponsorship and from money backgrounds, the above drivers from rags to riches prove to be the silver lining in formula one racing.

As F1 continues to promote diversity and inclusion in the sport, these stories are encouraging to those who might be from wealthy or rich families.

Lewis Hamilton, who is spearheading this drive for diversity is a good example that one does not need to come from rich families to succeed in F1.

It shows that if you work hard and dream big, you can reach the highest levels of your career in motorsport.