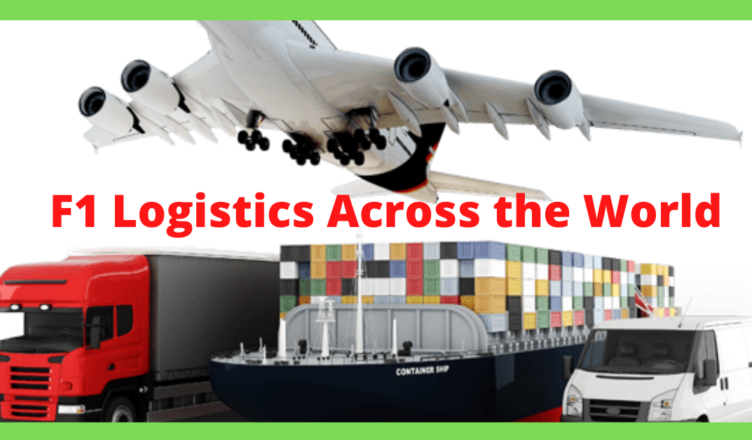 Attending or watching a formula one race is very exciting. You will enjoy every bit of the activity on the track. However, what you might not see are the logistics behind the greatest motor sport in the world. How are F1 cars transported between Grand Prix venues across the world?

Understanding the logistics of formula one racing will help you appreciate the sport even more. You are going to learn how cars, equipment and other F1 parts are transported to different grand prix venues.

For example, the F1 season in 2022 will include 23 races across five continents.

Logistics play an important role when it comes to formula one. Teams have to move their cars, people and other supporting materials to all the F1 racing venues.

Formula one uses air, sea and road transport to move things around. It is a huge undertaking and requires efficient planning to avoid any mistakes or delays.

How F1 Cars are transported to Venues

F1 cars are transported to racing venues in three ways;

As you can see, formula one cars and other F1 equipment are transported between Grand Prix venues by air, sea and through the road.

These are the three main ways in which F1 uses to move cars, personnel and other equipment.

One of the major logistics partner to formula one is the DHL. The company helps to transport F1 cars among other things to various racing venues across the globe.

As mentioned above, formula one teams use three modes of transport to transport F1 cars to race venues.

Most of the F1 teams are based in Europe. The only exception is the Haas team, though they have a forward operating base in the UK.

In this regard, it means that formula one teams transport everything from their Europe-based offices.

It is important to note that teams have about 40-50 tonnes of equipment at each race.

As mentioned before, there are three modes of transport to get equipment to a Formula 1 race, and it all depends on the location of the race and how critical the equipment is.

Everything is packed into trucks at the racetrack, and these trucks will either continue to the next track, travel to the airport to unload their cargo or go to the port to put the non-vital containers back on a ship.

One of the modes of transporting F1 cars to Grand Prix venues is by road. It is one of the cheapest and easiest option for the formula one teams.

In most cases, this is done by in-house logistics team.

These trucks usually drive non-stop until they reach their destination.

To accomplish this, multiple drivers will be assigned to trucks. In some cases, you will find an RV following the truck to allow the drivers to sleep when they are not behind the wheel.

This ensures that there is always a fresh driver ready to take over, so the truck does not have to stop for long.

As I mentioned earlier, this is another way you can transport F1 cars to Grand Prix venues.

F1 teams do not really like this mode of transport because it is expensive. They have to charter cargo planes to fly everything to the race venues.

Sometimes teams shares the cost of hiring a place.

Due to the high cost of air transport, the teams only use this mode to transport F1 cars to far away races. These are venues where it is not possible to drive to in a few days.

For example, you will find teams flying formula one cars and other essentials to such venues as Baku and Sochi.

The planes are usually chartered by Formula 1 in conjunction with DHL, and the teams are then charged for their share of the cargo space. The equipment is sent out in order of necessity at the other track.

The panelling, IT equipment and any other things needed in the garage are usually sent out first, as the set-up teams need to make sure the garage is in working order.

They do this so the cars and other mechanical equipment like the wheel guns can be brought into a working environment.

Mechanics and engineers need to arrive at a fully working garage, so the garage components are the first things to get to the new track.

When it comes to transporting F1 cars between Grand Prix venues, shipping or sea mode of transport is cost-effective.

However, it is a slow way of moving thing to race venues.

In this regard, the things that need to be transported through shipping are sent in advance.

At the start of the formula one season, the F1 teams ships about five containers worth of non-essential equipment to the fly-away races. In most cases, these are the non-European races.

The containers contain about 200 tonnes worth of equipment. You will learn that these sets will then rotate between the fly-away races throughout the season.

Everything in these shipping containers is deemed non-critical for race performance. This includes jacks, trolleys, tables, chairs, printers, kitchen equipment, exercise equipment, hospitality items, and fan-zone items. These items are relatively cheap compared to the complex IT and mechanical equipment  that the teams take with them from race to race, which means teams can have multiple sets of them.

In 2019, the five shipping containers were sent from the United Kingdom to Spain, Australia, China, Azerbaijan, and Bahrain. The container in Spain was then driven around by the teams for the European legs of the F1 championship, while the rest of the containers get rotated around the world.

Logistics and Transportation in Formula 1 Racing

As you look into the logistics of formula one, it is important to think of the things that need to be transported.

While the F1 cars are an important part of what is moved from one race to the other, there are other important things team consider. This includes personnel and equipment.

Some of the team personal includes:

Some of the equipment needed includes:

What Is Inside a Formula 1 Motorhome

One of the common features at various F1 racing venues are motorhomes. Each formula one team has one or several depending on their needs.

A motorhome is usually a very impressive double and sometimes triple storey structure. It is a complete ‘home’ that has everything needed to entertain F1 staff and guests.

It is important to know that an F1 motorhome contain fully equipped kitchens and restaurant.

Most of them have rooftop seating areas with outdoor furniture and some even have plants.

Example of an F1 Motorhome – The Red Bull motorhome.

This is also known as the Red Bull Energy Station, and it provides facilities for both Red Bull Racing and Scuderia Alpha Tauri.

Some of the rooms are fully built and have pre-built cabling in the walls, making assembly quicker and easier.

For the Monaco Grand Prix in 2019, Red Bull decided to take their motorhome transportation to the next level.

Due to the space constraints in Monaco, they built the entire energy station on a floating barge.

The structure was put together in Italy and then sailed 20 miles down the Mediterranean coast to Monaco.

The whole thing weighed 300000 kg (661387 pounds), and it had to be carefully manoeuvred past superyachts in the Monaco harbour.

In conclusion, transportation of F1 cars between Grand Prix venue is an elaborate activity.

Each team must plan well for the land, sea or air transport of the racing cars as well as the personnel.

Logistics is a key department or division within formula one teams. The head of logistics ensures everything is sent to the race venue on time for the race weekend.

This means planning must be meticulous to avoid mistakes or leaving behind some critical parts. It can be very costly to not pack all the required parts.

When transporting an F1 car between Grand Prix venues, you will realize that the logistics form the backbone of the sport.

Specially designed lorries, aeroplanes and ships are used to transport the F1 cars to the various locations that host grand prix events.

Therefore, next time you are enjoying an F1 race, realize that a lot of logistics have gone into making it happen.