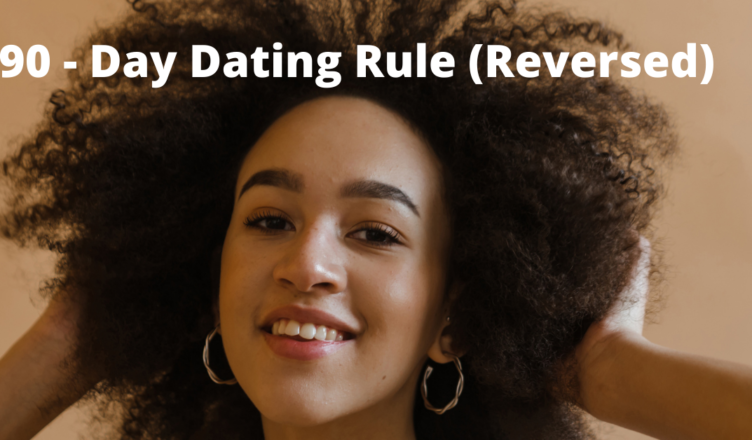 In relationships, some compare the 90-day rule to a sexual probationary period similar to that of a new job position. The thought behind is very simple. That when one waits 90 days before having sex, you will begin to see the real person you are dating. As a lady, would you date a man with a 90 day rule on spending money on dates?

If you are a lady, it is very common for you to make a man wait for a while before getting intimate with him. Am sure you are using this as a test of his patience and commitment to the relationship.

However, things get interesting when a man tries to reciprocate the gesture by avoiding to paying for dates or asking you to go Dutch. I would be interested to know, would you date a man with a 90 day rule on spending money on dates?

This is something that I really wanted to find out. So I set out to do some research on this subject.

The premise or the hypothesis is simple. A man is expected to wait for 90 days before getting intimate with you. In those waiting days, would you expect him to pay for dinner bills on dates?

But this is where it gets confusing. Why would you have such expectations?

If a man is going to wait for 90 days to sleep with you, would it be fair to for 90 days before he spends on dates?

Would you date such a man?

If you’re considering the rule, start by thinking about how you will present it to your dating partner. You may want to tell them outright about it. But if there’s any question in your mind about whether you’ll follow through with the rule, consider another approach. One way is to suggest that the two of you go slow with intimacy until you know each other better. And let them know that this might take some time.

The 90 day rule in relationships is the time a woman should wait before having sex with a man she is dating.

The idea of the 90 day rule is popular because of  Steve Harvey, who compares it to the 90 day probation period when you get hired at a new job.

The 90-day rule suggests that you wait for three months after you start dating someone before you have sex with them. Are there any benefits to using the 90 day dating rule?

Go here and read more about the benefits of the 90 day dating rule.

While either gender could use 90 day rule, it is mostly associated with women.

In this regard, your relationship is considered a job, and means your new ‘hire’ should wait for 90 days before getting the benefits of the cookie jar.

It is an interesting way of dealing with intimacy in a new relationship. Some people agree with it and other think it is wrong to use sex as a measure of love between two people.

Would you date a man with a 90 day rule on spending money on dates?

When you ask this question to women, you are going to get a mix of reactions. However, most responses are against this idea.

There are a mix of answers and opinions on this.

Here are a few responses from people;

Imia, from Chicago, states: “90-day rules are really pointless.  Do it when you are ready– not when the calendar tells you to. No, I wouldn’t be with a man who waited 90 days to spend money on me. I don’t do ‘Netflix and chill’ (even that includes food, which costs). And I live in Chicago, so no walks in the park or picnics for eight out of the 12 months… that doesn’t even make sense!”

“I think having a set amount of time to wait is dumb. All he has to do is wait 90 days and he’s guaranteed sex. He can fill his sexual needs with other women in the meantime. 90 days have passed, and he still dogs a woman out afterward. While I do not have an exact length of time; I think a woman should wait it out some time before sex. I think giving it up too fast can be a detriment to laying the foundation of a long lasting relationship. There are different types of men out here. Some will wife you after smashing the first night. It’s a new world, and one just has to do what’s best for them and their heart.” –Pierre, Miami, FL.

Andrew, of Memphis, TN, thinks, “If women enact the 90-day moratorium on sex, than men should do the same thing for spending money on her. If you’re trying to find out if she likes you, or he likes you for you then take away what’s important to them. For men it’s sex, for women it’s money, and either option will expose people’s true feelings.”

Kimberly, of Chicago, says, “I never had a 90-day rule. My rule is that I’m not having sex with any man until we are in a bonafide relationship. However long it takes for us to agree that we are in an exclusive relationship, that is how long he’ll have to wait for sex.”

Many women actually said that they could date a man for 90 days without him having to spend money.

Interestingly enough, some men said they would wait 90 days before having sex, but would still be intimate with someone else until that point.

In regards to the women pulling the 90-day rule, I myself have used it one time and one time only. I soon realized after that relationship flopped that it honestly doesn’t matter how long you wait to engage in sex in terms of a “better” or “long-lasting” relationship. Sidebar: I waited for five months and the relationship ended on month ten, so there’s no guarantee. If you’re into someone and it’s mutual on both ends, why not? Now, will I hop in bed with someone after the first or third date? No.

Why there’s no chastity in 90-day rule

The 90-day rule is a controversial take on relationships. It has its detractors and supporters, who mainly think it is a good means of fishing out the ‘hit and ditch’ type of men. Some experts recommend it for those interested in a long-term relationship to avoid men who are sports fishing.

I have come across a book in which the author argues that men are getting bored easily if they conquer and get the benefits too early in the dating game.

Apparently, a man is going to feel challenged in waiting for the satisfaction. The to-and-fro thrill of trying to win the trophy is what is getting a man them hooked and interested.

My friend Sarah (not her real name) met this charming guy in one of those high-end bars. She is the go-getter type and is going to swoop in fast as soon as she spots a guy she is interested in.

Sarah is the type that would sit at a table with men and order Dom Pérignon champagne without batting an eyelid.

She has always played by the 30- day rule and is not generous with her treasure trove. Her claim is that before getting the key to the city, a man must first prove his worth.

So, when she called me last weekend over to her house at 3am, I knew something must be wrong. She was in anguish. The man she had preserving herself for a whole 35 days before laying out the red carpet just dumped her.

Apparently, the brother texted her and in not so many words, made it clear that her bedroom skills were akin to a Brazilian side pitted against Germany.

He even regretted waiting so long for such an anticlimax!

I am not a stickler for rules, neither do I have a schedule with unrealistic formulae on when to yield and give in to the throes of passionate sexual ecstasy.

In conclusion, it is interesting to learn and hear opinions on whether you would date a man with a 90 day rule on spending on dates.

When it comes to relationships, some people compare the 90-day rule to a sexual probation, similar to the probation you get in a new job position.

I do not subscribe to the 90-day sex manual. As far as I am concerned, when two mature and consenting adults want to tear at each other in a passionate sexcapade after just two hours, they might as well go ahead.

Maturity is the key and 90 days is not that long anyway if you come to think of it. The 90 day rule on spending money on dates should not be the reason not to date someone.

However, deliberately, withholding sex, notwithstanding the burning desire that might make you lose your head, may not necessarily create the impression that you are a proper girl.

How can you even tell whether the guy is into you if you are so concerned with make-believe chastity belts and laser beams around your loins?

The 90-day rule should have nothing to do with sex. While sex is the cherry on top of a long-awaited sundae, it should not be the ultimate goal.

You would have scored regardless of when you decide to give him the coital pass.

And there are no guarantees; there is a chance of you hurting even if the honey jar remains unopened.

The choice is yours.

What is Steve Harvey 90 day rule?

The 90-Day dating rule is popular because of Steve Harvey. He is the author of “Act Like a Lady, Think Like a Man.” The rule is encouraging women to make men they are dating wait 90 days before having sex.  Harvey compared this rule to the 90 days one must wait to receive benefits at a job.

Does the 90 day rule work dating?

How many dates should I go on before I sleep with a guy?

Results showed the average person polled would wait until date eight in an ideal world before taking things to the bedroom. The study by Groupon found men feel sex is appropriate at any point from date five onward, but women would rather wait until date nine, on average.

Is it possible for a guy to fall in love quickly?

The reason behind this, according to the study, is because men don’t question their emotions like women do