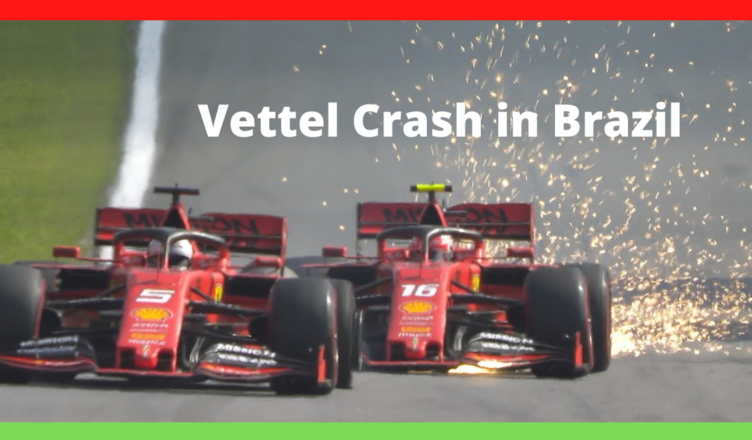 It was a nightmare for Ferrari when Sebastian Vettel and Charles Leclerc crashed out of the race in 2019. The two took each other out on Lap 66. It would therefore be normal for you to wonder; will the Ferrari crash in Brazil affect Vettel this year?

When drivers from the same team crash out, it can be a very big loss. It means that the team does not score any championship points in that particular weekend.

You can understand why Matia Binotto, Ferrari’s team principal was furious when Vettel and Leclerc crashed out in Brazil.

It was a culmination of tension between the drivers, and probably poor judgement on the part of the drivers during the race.

Brazilian Grand Prix has always provided great entertainment. The track allows drivers to overtake on the straights, and it can explain why Vettel and Leclerc crashed.

You are not wrong to ask whether that Ferrari crash in Brazil will affect Sebastian Vettel this season.

Will the Ferrari Crash in Brazil affect Sebastian Vettel

As the formula one teams visit Brazil this year, it is interesting to see how Sebastian Vettel is going to perform.

In my personal opinion, I do not think that the Ferrari crash in Brazil will affect Vettel this year.

For one, he is with Aston Martin F1 team and not Ferrari. This means he is not having Charles Leclerc as a team mate.

Another reason is that he seems to be in a different space in terms of his driving and focus. With Lance Stroll as team mate, there is clear structure as to who is considered the lead driver.

In formula one, team collisions are not always good. The one between Vettel and Leclerc in 2019 compounded the tensions that had been building all season between the two drivers.

Read More: How Many Grand Prix has Sebastian Vettel Won?

For Ferrari, that was their first team collision since 2017 when Kimi Raikkonen and Sebastian Vettel crashed in Singapore.

I do believe that Vettel is not looking into crashing out of the Interlagos Grand Prix this year.

To recap, this is how the Ferrari crash in Brazil happened.

It is good to note that the race at Interlagos had been competitive between the two Ferrari drivers. Therefore, it was expected that when an opportunity presents itself, they would try to overtake each other.

Both drivers were vying for position when Vettel went to pass Leclerc. After overtaking him, then Seb moved to the left, squeezing Leclerc.

You would have expected Charles to give way, but he did not yield ground and they touched. They both sustained tyre damage that eliminated both Ferraris.

Sao Paulo Grand Prix in 2021 was a very eventful one.

The highlight of the race was Lewis Hamilton starting 10th on the grid, and eventually winning the race.

You might want to watch a replay of this race to fully appreciate how that happened. The icing on the cake was Hamilton overtaking Verstappen on Lap 59 on Turn 4.

As for our Sebastian Vettel, he finished P11.

Seb had started P9 ahead of Lewis Hamilton. However, it did not take long before Hamilton overtook him on Lap 2.

This was a better result, when compared the result he got the last time F1 raced in Brazil back in 2019.

In conclusion, it is interesting and fun to see how Sebastian Vettel performs on track during the Brazilian Grand Prix.

The crash between Vettel and Leclerc during the 2019 season was a major talking point. It led to the Ferrari team crashing out of the race on Lap 66 of 71 Laps.

When team mates collide, it means they do not score any points. A team can lose the championship if they make such mistakes enough times compared to their rivals.

It is a clear indication that drivers within a team should give each other enough space when racing. The rules talk about giving another driver a car’s width.

As the season this year progresses, it is unlikely that Vettel will make the mistake during the f1 event at Interlagos.

Driving for Aston Martin F1 team has provided Sebastian Vettel with an opportunity to prove his worth. He brings to the team experience and speed that he is known for in formula one.

This chapter of his F1 one racing promises to be a good one. Time will tell in the next couple of years.