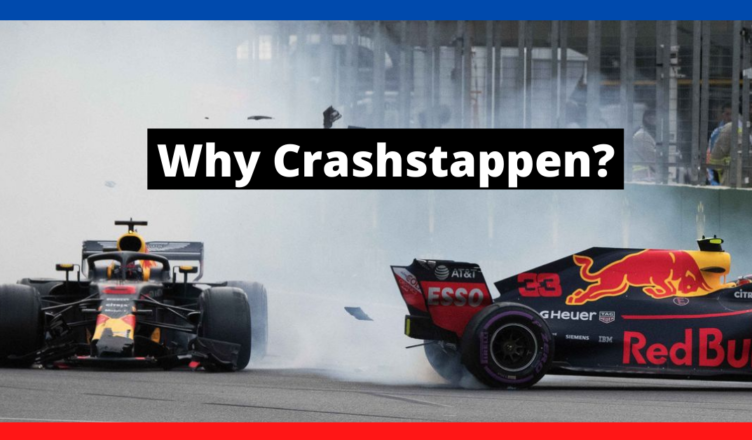 In formula one racing, you will find that crashes do happen. Sometimes they are avoidable and in other times, not so. In some cases, one driver might be involved in a number of F1 crashes. When it comes to F1 racing crashes, you might ask; why is Max Verstappen called crashstappen?

While this might sound or seem like a meme, there is a reason why some formula one fans think of Max as a crashstappen.

There is a story and a history to that particular name.

You can bet that Max Verstapen does not like being called crashstappen. His anger has surfaced on several occasion when reporters have probed him further into racing crashes.

A case in point was when was asked about his crash with Lewis Hamilton at the Silverstone racing track.

When you look into it, there are reason why people refer to Max Verstappen as crashstappen.

It is not a funny name, and I am sure he does not really like it. To be fair to Max, he has really grown and developed as a driver.

Here are the three reasons;

It is on record that max Verstappen joined formula one at the early age of seventeen. This was back in 2017.

However, in the first three or four years of his career in formula one racing, he is the driver who has caused more crashes than anyone else.

This explains why some call him crashstappen.

You might even ask; is Max Verstappen overrated as an F1 driver?

5 Crashes That Explain Why Verstappen is Called Crashstappen.

As you try to understand why Max Verstappen is called crashstappen, it is important to look at some of the top F1 crashes that he has caused.

I will look at the top five historical Max Verstappen crashes. They include the following.

If you check the above races, and the crashes that had Max Verstappen as a participant, you will realize why some nickname him crashstappen.

This was a good race until Red Bull’s teammates collided into each other. It was a crash that involved Daniel Ricciardo and Max Verstappen.

At the time of the crash, they were running 5th and 4th places respectively.

They both retired from the race.

It was the first time in history that a virtual safety car was deployed during Monaco GP.

This was after Max Verstappen rammed into the barriers after crashing at the back of Romain Grosjean of Lotus.

In the process of overtaking Grosjean by lap 59, the Dutchman ended up clipping on to the rear of Lotus at the Sainte Devote corner and then got carried away by G-force crashing the nose-first into barriers.

This is another reason why Max Verstappen is called crashstappen.

This incident involved Max Verstappen and the Ferraris of Kimi Raikkonen as well as Sebastian Vettel.

It took place at the right turn before the Eau Rouge corner.

This incident caused a damage to Verstappen car making him finish the race 11th after starting at 2nd on the grid.

If you are still wondering why max Verstappen is called crashstappen, then continue reading.

This was a race that saw Verstappen crash out after an incident on Turn 1.

After the lights out, Max Verstappne’s Red bull was hit at the rear while taking the wide turn. The culprit was Alonso, driving a a Mclaren which had been forced into a spin by the Toro Rosso (now Alpha Tauri) of Daniil Kvyat.

This crash put both Verstappen and Alonso out of the race at Turn 1.

Monte Carlo has been haunting the Dutchman consistently, 4 races and 4 crashes.

During 2016 Monaco GP at the 34th lap virtual safety car was called to intervene the race till 37th lap as Verstappen rammed his car into the swimming pool chicane barrier after locking up his tires.

To add to the Dutchman’s torments, sixth consecutive crash in 2018 season happened during the third practice.

Opting for an extra one last run in third practice he crashed his Red Bull into the same swimming pool chicane. The impact broke the steering and propelled him into the steel barriers.

Related: Do All F1 Drivers Come From Rich Families

During the 2021 formula one season, Max Verstappen crashed into Lewis Hamilton during the Italian Grand Prix.

It was an incident where stewards blamed Verstappen.

This is another reason why some formula one fans call Max Verstappen as crashstappen. He seems to court or invite crashes everywhere goes.

It was the second time in the season, where an on-track battle between Verstappen and Hamilton ended in a collision.

The incident came about following a slow pit stop for Verstappen, which put the Red Bull driver’s position under threat from Hamilton.

As Hamilton emerged from his own pit stop he just about had track position over Verstappen, who was hurtling down the pit straight in excess of 200 mph.

Under braking for the first part of Monza’s Rettifilo chicane, Hamilton squeezed his rival to the outside of the track before Verstappen responded in the next phase of the chicane by attempting to barge his way past on the inside of Turn 2.

The race stewards decided Verstappen was “predominantly to blame” for causing the collision and gave him a three-place grid penalty for the next race in Russia.

They noted that the Red Bull driver was “not at all alongside Car 44 (Hamilton) until significantly into the entry into Turn 1” and that Verstappen’s move between Turn 1 and 2 was “attempted too late for the driver of Car 33 [Verstappen] to have the right to racing room”.

In conclusion, it is important for you to understand why Max Verstappen is called crashstappen.

Simply said, being called crashstappen is way to explain how often he has been involved in F1 racing crashes.

At some point in his formula one career, Max Verstappen driving style has been the cause of major racing incidents.’

The most recent one is the incident with Lewis Hamilton on Turn 1 in Monza, Italy. It was an incident that Verstappen was found to the predominantly responsible for by the stewards.

He was punished for it and given a 3-place grid penalty.

In this sense, you can argue that Max Verstappen is called or referred to as crashstappen because he is considered to have caused several F1 crashes.

As he grows and develops as an F1 driver, it is expected that he will become better. He will improve as a driver and his driving style might stop being aggressive.

If that happens, then formula one fans might stop calling him crashstappen.