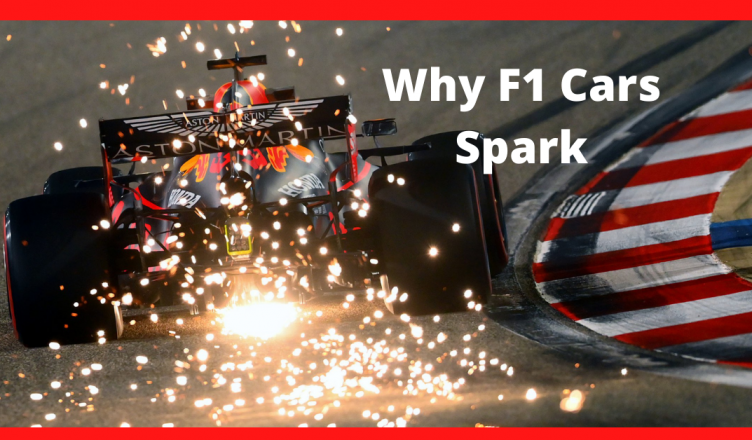 As a formula one fan, one of the most spectacular things you will see during a race is sparks from an F1 car. You might be tempted to think the car has a problem, or even wonder; why do F1 cars spark?

When it comes to a formula 1 car and sparks, there is a history. you will find it very interesting and intriguing how sparks in F1 has evolved over the years.

It is always a beautiful thing to watch a formula one car creating sparks down a straight or on corners.

To be honest, I do enjoy seeing it. In fact, it is spectacular during the night races in places such as Bahrain or Singapore.

But why do F1 cars spark? Why do formula one cars create sparks from the back?

In this article, you will learn how F1 cars generate sparks during a race.

This is an in-depth look into what makes formula one cars spark from the back, why they spark and whether it is bad or good for the cars.

Why Do F1 Cars Spark?

A formula one car creates sparks from the back when a titanium plank fitted underneath the car comes into contact with the track.

There are three main reasons why F1 cars spark and include;

As aerodynamic forces presses the car down onto the track at high speeds, this creates downforce making the F1 car hit the ground creating sparks at the back.

Sparks in F1 are caused by a plank under the car hitting the ground. The plank runs from the rear of the car up to just before the front wheels.

These skid blocks prevent the plank from being damaged and protruding no more than 3mm.

Because F1 cars are so low, when “bottoming out,” these titanium skid blocks often hit the ground, creating a shower of sparks behind the car.

When you watch an F1 car creating sparks behind it, you will truly enjoy the spectacular show it generates for the audience.

3 Key Reasons Why F1 Cars Spark from the Back

Now, let me help you understand why F1 cars spark so much from the back.

The whole idea here is sparks are created as a way of stopping F1 cars from bottoming out.

In formula one, there is always innovation and development. This is usually aimed at making the cars better and faster.

Among them is the idea of aerodynamics and the downforce.

You will often hear teams discussing their efforts to increase downforce, or improve the car’s aerodynamic package.

This is meant to improve the overall performance of the car on the track during racing.

Another reason why formula 1 cars spark so much is the use of titanium kid blocks.

This was not the original idea.

In the past, F1 cars used to have metals underneath the car. However, this was changed to titanium.

As mentioned earlier in this article, F1 cars are usually fitted with a plank that runs from the rear of the car to just before the front wheels.

This wooden plank is embedded with titanium skid blocks, whose role is to prevent the plank from being damaged.

Titanium is used because it is safe, wears out quickly and produces more sparks.

There is a debate as to whether formula one is a sport or entertainment.

Some fans are concerned that F1 is becoming more of an entertainment show than a sport. Maybe they have a point.

One of the reasons why F1 cars generate sparks is actually to entertain the fans or the audience.

It is a deliberate effort to spice things up for the formula one, and make it more entertaining for the fans.

When it comes to entertainment, some have argued that the ending of the last race in 2021 during Abu Dhabi Grand Prix was created for the entertainment.

In conclusion, there are reasons why F1 cars spark so much from the back.

Watching a race becomes very entertaining when cars are creating sparks on straights or corners.

But do you know why formula one cars spark?

The main reason why F1 cars spark is because they have titanium skid blocks underneath the car. When the skid blocks come into contact with the track on the straights or at corners, the F1 creates so much sparks from the back.

To many fans, this is exciting. It is more spectacular when it happens during the night races in Bahrain or Singapore.

However, formula one cars also create sparks during the day.

In simple terms, F1 cars create sparks because they run very low. This makes them come into contact with the asphalt on the track in high-speed corners and on the straights.

It also happens when there are abrupt elevation changes.