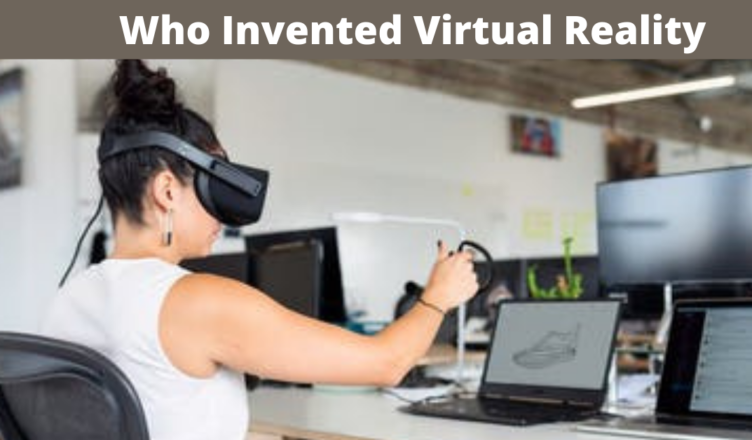 Today, you can help you learn about different places or even ideas, experiencing them as if you were exactly there. It is an interesting experience and it is being applied across industries including oil and gas. I recently wondered, who invented virtual reality?

This question made me go into doing research to find out where virtual reality began. It was a journey that took me back and this is what I found out.

Ivan Sutherland in 1968 invented virtual reality. The first actual Virtual Reality head-mounted display (HMD) was created in 1968 by computer scientist Ivan Sutherland. Sutherland was one of the most important figures in the history of computer graphics, having developed the revolutionary “Sketchpad” software that paves the way for tools like Computer-Aided Design (CAD).

In 1965 American computer scientist Ivan Sutherland presented the notion of ‘the absolute display’.

In his 1965 paper and corresponding speech, Sutherland laid out a vision for the future of the VR format, both predicting and spurring the move towards indistinguishable-from-real computer graphics, audio, navigation, interaction and ultimately, total perceptual immersion.

Whilst not a technological development itself, this theory was pivotal in the story of VR, guiding Sutherland’s own experimentations in VR as well as spurring innovation in VR throughout the generations that followed.

Sutherland’s head-mounted display was a project he described as “the ultimate display.” It connected to a stereoscopic display from a computer program depicting simple virtual wireframe shapes, which changed perspective as the user moved his or her head. Because these are superimposed on top of a real background, this could also be seen as the birth of “augmented reality.”

To fully understand the evolution of this idea, we need to take a step back to see precisely how VR developed from a mere postulation, into a reality all of its own.

Notably, and somewhat predictably, the notion of ‘virtual reality’ entered the zeitgeist via science fiction, with Stanley G. Weinbaum‘s 1935 short story ‘Pygmalion’s Spectacles’. This vision of Virtual Reality told of a goggle-based contraption that offered users a holistic holographic experience that went as far as to include touch and olfactory elements.

Whether we want to go as far as saying that Stanley ‘called it’ or not, his vision did offer something for developers to aim for and does border somewhere close to the current state of virtual reality.

Today’s virtual reality technologies build upon ideas that date back to the 1800s, almost to the very beginning of practical photography.

In 1838, the first stereoscope was invented, using twin mirrors to project a single image. That eventually developed into the View-Master, patented in 1939 and still produced today.

The use of the term “virtual reality,” however, was first used in the mid-1980s when Jaron Lanier, founder of VPL Research, began to develop the gear, including goggles and gloves, needed to experience what he called “virtual reality.”

Even before that, however, technologists were developing simulated environments. One milestone was the Sensorama in 1956. Morton Heilig’s background was in the Hollywood motion picture industry. He wanted to see how people could feel like they were “in” the movie. The Sensorama experience simulated a real city environment, which you “rode” through on a motorcycle. Multisensory stimulation let you see the road, hear the engine, feel the vibration, and smell the motor’s exhaust in the designed “world.”

Heilig also patented a head-mounted display device, called the Telesphere Mask, in 1960. Many inventors would build upon his foundational work.

By 1965, another inventor, Ivan Sutherland, offered “the Ultimate Display,” a head-mounted device that he suggested would serve as a “window into a virtual world.”

The 1970s and 1980s were a heady time in the field. Optical advances ran parallel to projects that worked on haptic devices and other instruments that would allow you to move around in the virtual space.

At NASA Ames Research Center in the mid-1980s, for example, the Virtual Interface Environment Workstation (VIEW) system combined a head-mounted device with gloves to enable the haptic interaction.

Today’s current virtual reality gear owes a debt of gratitude to the pioneering inventors of the past six decades who paved the way for the low-cost, high-quality devices which are easily accessible.

To help you understand the evolution of the medium, we’ve put together a comprehensive timeline to show the key steps in the journey from sci-fi concept to virtual reality as we know it today.

Cinematographer Morton Heilig developed ‘Sensorama‘ as a culmination of his quest to build a more complete cinema experience. His arcade-type booth is considered the world’s first virtual reality machine.

Heilig’s Sensorama (patented in 1962) was a non-computerised VR machine. Early attempts in what later became known as the VR industry were unable to offer anything near the depth of visual field we enjoy today, so instead focused on creating phenomenologically complete virtual environments for their users.

To do this, the Sensorama displayed stereoscopic-3D film combined with audio, moving air, vibrations and even aromas.

In terms of navigability; the rotating chair, combined with the stereoscopic imagery, granted the user some control over the experience, nothing comparable to VR as we know it today, yet otherwordly nonetheless.

This was quickly followed by…

the development of the first motion-tracking HMD by the Philco corporation, known as the ‘Head Sight’.

This freaky-looking device was created for military purposes and consisted of a head mount, video screen and tracking system linked to cameras. The key development in this instance was that users could now move their head to trigger an adjusted view of the scene.

Sutherland, along with his UNC Chapel Hill student, Bob Sproull, revealed their prototype for the first virtual and augmented reality head mounted display in the paper “A Head-Mounted, Three-Dimensional Display”. Their contraption, due to its frightening ceiling-mounted aesthetic, soon became known as The Sword of Damocles.

This project included the first widely known use of a car-mounted gyroscopically stabilised camera that would take a snapshot every 10 feet, paving the way for platforms such as Google Streetview.

The company VPL Research was founded as the first company to sell VR goggles and gloves.

VPL founder Jaron Lanier popularised the term “Virtual Reality”. All the research that had come before could now be spoken about in a collective way, bringing about the true birth of the VR industry.

The first video game with 3D technology was brought to the mass market by ATARI.

In order to be in the driving seat of the Mars Rovers from Earth, Antonio Medina invented a virtual reality system known as “Computer Simulated Teleoperation”.

Virtuality was launched – bringing the first mass produced VR arcade games and entertainment systems that incorporated a multiplayer aspect to the public, who were left in awe at the level of immersion they offered.

There was promise of VR finally entering the home as SEGA announced the SEGA VR headset, but unfortunately, the contraption never made it to public release due to safety concerns over effects on user eyesight.

The cheap home VR headset finally arrived as “Virtual IO I-Glasses” were produced. This had the dual effect of making VR more accessible to the individual, whilst also bolstering public criticisms of VR as a lonely device.

In the same year, Nintendo brought us their 32-bit “Virtual Boy” console, which had a whole range of games for users to enjoy.

As further developments waited for the requisite technological advancements, the VR hype subsided, kept alive only by films such as the original Ghost In The Shell and The Matrix, which helped to instantiate the sci-fi possibilities of the medium in the eyes of the world.

With the VR hype never truly finding the legs it originally promised, it seemed as if the format had suffered it’s final defeat, however as the tech finally caught up with the supporting ideas, the next key development came.

With Google developing a stereoscopic 3D version of their Street View app.

Palmer Luckey wowed investors with his Oculus Rift prototype, bringing the spotlight of the VR industry onto his laid-back shoulders.

In conclusion, virtual reality or VR has continued to progress in many distinct ways. There are applications ranging from those in business to the exclusively entertainment-focused, even establishing itself as a format worthy of Cannes.

As a filmmaking tool, virtual reality is showing great potential, so too in journalism. The New York Times is leading the way with an extensive catalogue of immersive experiential journalistic VR experiences.

Virtual Reality is also gaining acceptance in the oil and gas industry where investments is being made towards application and use of VR in this sector.

In terms of the future of VR, no one in the industry is that sure of what is to come. We are so far undergoing a process of experimentation that has led to some wonderful experiences..

As this process continues we will start to see the industry carve out the space or spaces it is meant to take up, whatever they may be. One thing is for sure, this time VR is here to stay and you should forget who invented virtual reality.

When was the first VR headset released?

Who is the father of virtual reality?

Jaron Lanier is the founding father of virtual reality.

There are two problems that has stopped virtual reality from exploding. Those are hardware and software.

When was virtual reality first used?

The use of the term “virtual reality,” was first used in the mid-1980s when Jaron Lanier, founder of VPL Research, began to develop the gear, including goggles and gloves, needed to experience what he called “virtual reality.” Even before that, however, technologists were developing simulated environments.