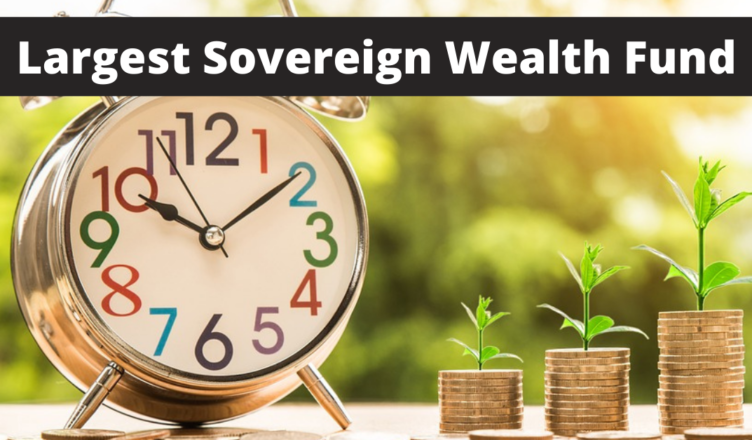 The management of wealth and resources is a very critical thing to the financial health of a country. One of the tools or ways country’s use is a sovereign wealth fund. These wealth funds are becoming increasingly powerful players on the global financial scene. In this regard, which is the largest sovereign wealth fund in the world by assets or investments?

It is something that I was wondering about. So, I have done research and this is what I found out. Despite their rapid rise, sovereign wealth funds are often less well understood than other types of investment vehicles.

Which is the largest sovereign wealth fund?

The largest sovereign wealth fund is the Government Pension Fund Global of Norway with $1,123,110,000,000/= in assets. It is also called Norway GPFG and is managed by Norges Bank Investment Management which is the Norwegian Central Bank, This fund was set up in 1990 as the Petroleum Fund of Norway to invest the surplus from oil sales but changed to its current name in 2006. Some of the fund’s biggest equity holdings include Nestle SA, Royal Dutch Shell, Amazon, Apple, Alphabet and Microsoft among others.

As investment funds, most sovereign wealth funds are state-owned and their sources of revenue is often the balance of payment surpluses, fiscal surpluses and in particular oil or gas revenues.

Who has the largest sovereign wealth fund

This is one thing am sure you would want to know today. According to the Sovereign Wealth Fund Institute, Norway is the country who has the largest sovereign wealth fund. The Government Pension Fund Global is the largest wealth funds in assets holding over $1.2 trillion as of December, 2020.

Its profits are from the state-owned North Sea oil drilling operations and this makes the fund susceptible to crude oil prices. The fund also generates revenues from taxes collected from oil companies paying for licenses to explore for oil in the country’s north sea area among others.

However, the investments the fund has made are making it weather the oil prices storm and reducing the exposure or risks.

It has over US$1 trillion in assets, including 1.4% of global stocks and shares, making it the world’s largest sovereign wealth fund.

In January 2021, it was worth about $195,000 per Norwegian citizen. It also holds portfolios of real estate and fixed-income investments.

Which country has the largest sovereign wealth fund

Scandinavia’s oil-rich country of Norway has the world’s largest sovereign wealth fund. It is called the Government Pension Fund Global. This fund has over $1 trillion in assets, a feat it crossed back in September, 2017 for the first time.

According to Yngve Slyngstad, who is the chief executive officer at Norges Bank Investment Management, the growth in the fund’s market value is stunning.

The fund’s investments include equities, real estate and fixed income assets. It has invested in over 9,000 companies in across 77 countries in the world.

As mentioned above, Norway’s sovereign wealth fund is the largest in the world and with over $1 trillion in assets it is growing fast. While the fund was set up as the Petroleum Fund of Norway to invest the surplus from oil sales, it has a new name now.

It is managed by the Norwegian Central Bank, the Norges Bank and in the last year alone, it made gains of close to $53 billion, thanks to the rally in U.S. stocks. In the first half of this year the fund has given a 6.48% return.

Stock markets have risen in recent days, partly due to the promising news from Pfizer relating to a potential solution to the global health crisis.

The S&P 500, a stock market index that measures the stock performance of 500 large companies listed on stock exchanges in the United States, hit a record level.

Such broad increases give an inevitable lift to the oil fund, which holds an interest in more than 9,000 companies around the world. The largest sovereign wealth fund is said to own approximately 1.5% of all publicly-traded shares in the world.

At the end of June 2020, the fund’s biggest investments were in Microsoft, Apple and Amazon. The fund also holds significant real estate investments in some of the world’s biggest cities.

Although the value of the fund is given in Norwegian krone, almost all of its holdings in shares, bonds and real estate are actually denominated in foreign currencies.

These are mainly the US Dollar and Euro. This means currency fluctuations make a significant impact on the fund’s value in krone.

This is the list of the top 11 largest sovereign wealth funds in the world, and ranked based on the assets under management.

Weakness in the U.S dollar as well as good equity markets have driven the increase in value.

In conclusion, it is important for you to know that when countries have excess cash reserves, they sometimes create investment vehicles to deploy that money and generate returns for the country. These investment vehicles can grow to become largest sovereign wealth fund like the Government Pension Fund Global of Norway.

The money in such funds is managed partly in-house and partly by external managers in some cases. Investments of the SWFs are across the globe and in a range of asset classes including equities, debt, real estate and alternative assets such as hedge funds or private equity.

But there is an important distinction that needs to be made. While the money is held in the country’s reserves and is invested, the SWF is different from a national pension fund like the Social Security Trust Fund or the California Public Employees’ Retirement System (CalPers.) The main difference is that SWF money belongs to the state, whereas the money in pension funds is eventually paid out to the people.

A lot of the SWFs of nations in the Middle East were set up to invest the windfall that these countries gained from the oil boom in the middle of the twentieth century.