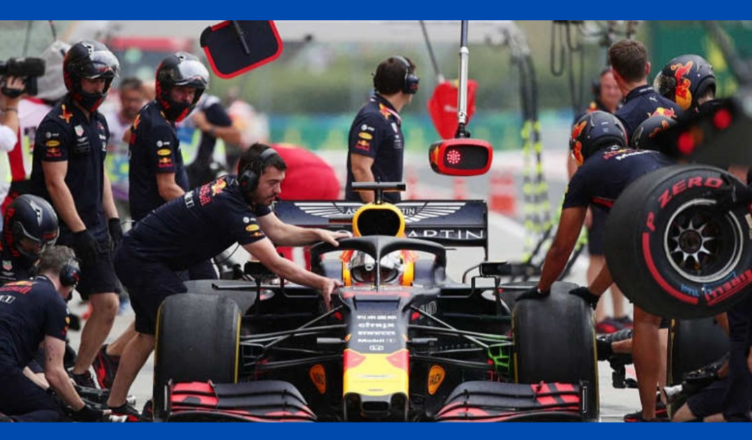 In formula one, each team has a number of members who play various roles during a race. For a team to achieve success on the race day, the pit stop has to be flawless. This means the pit stop crew in very important to the overall F1 team. So, who and what comprises an F1 pit stop team?

Pit stops are gaining a lot of attention these days. This is because of the role they play in a team’s strategy during a race.

The seconds spent on the pit stop can make a great deal of difference to a team winning a race. You will also note that pit stop teams are critical when it comes to undercuts and overcuts.

In this regard, it is important for you to learn who and what comprises an F1 pit stop team or crew.

As a formula one fan, you should know the key people and the role they play when it comes to a pit stop.

This will not only improve your knowledge of F1, but it will also provide you with information you can use during conversations with fellow F1 supporters.

It is important to note that all F1 pit stop crew or members are mechanics. They are assigned the role of taking part in a pit stop and might have other duties.

Some of the key members of the F1 pit stop crew include;

Combined, these roles comprise of about 20 formula one pit stop team or crew.

Related: How Many People are in the Mercedes F1 Pit Crew?

Each of the teams in formula one racing has a pit stop crew. a lot can happen during a pit stop and it is the duty of this team to execute a smooth stop.

What Comprises the Art of a Formula 1 Pit Stop Team?

One of the most fascinating things that I truly enjoy when watching an F1 race has to do with the pit stop.

It is like watching an orchestra at work. Almost feels like the F1 pit stop crew are creating an art.

As part of what comprises F1 pit stop team duties, you should learn how a pit stop is executed.

The driver enters the pit lane and reduces the car’s speed to comply with the speed limit of 80km/h.

Once the F1 driver crosses the pit lane line, he engages the speed limiter to electronically prevent the car from accelerating above the set speed limit.

The activation of this limiter automatically signals the fuel filler cap to pop open.

At this point, all the driver needs to do now is stop exactly at the designated spot in the pit box so as that the pit crew need not waste time in repositioning themselves.

The chief mechanic, who is the lollipop man signals to the driver to keep the brakes engaged. He does this by flashing the ‘brake’ sign on his lollipop indicator.

All the while, the driver is also revving up. It is possible you have always wondered why the car revs up when on the pit stop.

Now the car is lifted up by the jack men using the hydraulic jacks while the wheelmen remove the wheel nuts and proceed on to removing the wheels.

Once the new set of tyres is reattached using the pneumatic guns, there is a signal that transfers to the electronic pit light signalling that all four tyres have been successfully fitted.

This in turn is complemented by each of the wheelmen signalling the same by raising their hands to the lollipop man.

The car is now gently lowered down as the jacks as swiftly removed with the front jack man rushing out of the way.

The lollipop man now changes the sign on his electronic board to ‘first gear’ to signal the driver to move into first from neutral as the pit procedure is completed.

Upon inspecting the lane for any traffic and deeming the pit lane clear enough for a smooth exit, the lollipop man waves the driver away.

After leaving the pit lane and disabling the speed limiter, the fuel cap automatically shuts and the driver can proceed with the race.

In conclusion, an F1 pit team or crew comprises of a number of specialized mechanics who perform various duties during a pit stop.

Their actions and process create a very intricate performance. You can marvel at their precision. Some might even consider it an art.

I would agree, because I enjoy watching the pit stops, and the strategies teams deploy during a race. It is always fascinating.

Taking care of the people who comprises an F1 pit stop team is of great importance to a formula one team. That is why you will find that the pit stop crew earns very well.

As part of their compensation for great performance, they also earn bonus, over and above their monthly salaries.