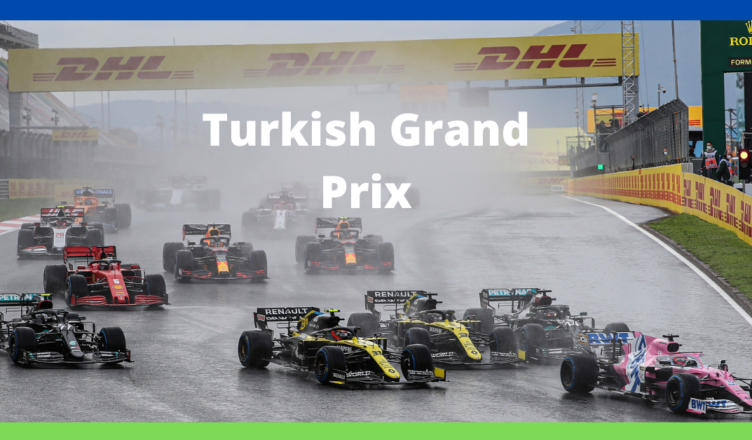 It is not often you get a chance to witness formula one drivers display their skills and expertise in tough conditions. However, the Turkish Grand Prix in 2020 proved to be the perfect and slick track to entertain fans. You would be correct to ask; was Turkish Grand Prix true show of driver vs car?

It was a return of formula one to Turkey after 9 years.  The Intercity Istanbul Park was added to the F1 calendar as the world faced unprecedented economic and movement restrictions.

As it turned out, it was worth it. Millions of people across the world watched a display of skills from Mercedes driver Lewis Hamilton to clinch his seventh driver’s world titles.

However, getting to the podium was not as easy as you would expect from a champion. It was the case with all other drivers who had their fair share of drama because of the wet surface. Some won, and other lost as you will read later in the article.

Turkish Grand Prix was a true show of driver versus car as demonstrated by the skills and expertise exhibited by various F1 drivers.

In some cases, drivers were able to control their cars and emerged on top. However, you had cases of the car dominating and the driver being unable to control it.

So yes, it was a race that truly tested the idea of the driver vs car.

Why Turkish Grand Prix was a Show of Driver vs Car

To fully appreciate why the Turkish Grand Prix was a true show of driver and car, you need to understand what happened.

It was a race which had a great deal of drama. Records were broken too.

Mercedes driver Lewis Hamilton won his seventh F1 world champion at the Turkish Grand Prix in 2020. He managed to overcome tricky conditions, and move from sixth to clinch victor.

If you compare Hamilton’s other titles, this seemed to be the most important or significant to him. It is a win that made him struggle to keep his emotions in check as her drove to the parc ferme.

During the interview, he visibly fought back tears.

As he drove to the parc ferme, he visibly fought back tear, revealing he failed in his in-lap

“When I came across the line, it really hit me and I just burst into tears, that whole in-lap,” Hamilton said. “I really just couldn’t get out of the car because I just couldn’t believe it.”

As sweet as the other six titles may have been, this one stands out above the rest for Hamilton.

Related: Do All F1 Drivers Come From Rich Families?

Winners and Losers at the Turkish Grand Prix in 2020

So who were the winners and the losers during the Turkish Grand Prix in 2021?

I honestly believe that the grand prix provided fans with a true show of driver vs car. You witnessed expertise and skilful driving on the track.

As you try to understand whether the Turkish grand prix was a true show of driver vs car, let us look at the winners during the race.

This is why I consider the following drivers as winners;

The race in Turkey was Hamilton at his best. There were no mistakes.

He was able to manage his tyres very well, and also had great pace under those tough conditions.

It was a true show of driver vs car and in this case, the driver won.

Leclerc was a big winner when it came to make one of the best pitstop calls of the day. He was able to fight his way to third on the grid, only losing to team mate towards the end of the race.

That proved to have been a good strategy.

It was a race that proved important for Sergio Perez, who was driving for Racing Point at the time.

Now he is driving for Red Bull, and having finished on the podium last year, it will be interesting to see where he finishes this year.

He also proved to a great driver in a true show of driver vs car during the Turkish Grand Prix.

As a Ferrari driver then, Sebastian Vettel performed very well. It showed that skills and experience matter in formula one racing.

As you see, his was a trust show of driver vs car with the driver winning in this instance.

Sebastian was able to rise up to the challenge when it became about reading the race. He used his tyres well and delivered a podium by finishing third.

From 16th on the grid after a penalty, Carlos Sainz had a remarkable race.

He drove in a classy way where he combined pace, patience and the combativeness needed in F1.

Carlos was right there with Perez and the Ferrari battle right at the end. He finished fifth but it might so easily have been better.

It will be interesting to watch how they perform during this year’s grand prix at the Istanbul Park.

I think it also important to look at drivers who did not perform so well. In understanding if Turkish Grand Prix was a true show of driver vs car, then you can argue that the car won over the following drivers.

This how their race turned out at the Istanbul Park in Turkey in 2020.

You might have come to know that Max Verstappen has the all or nothing driving style. This mentality made his come out of the Turkish Grand Prix with nothing.

He was stuck behind Perez and in his hurry to go past the Racing Point driver, he threw caution to the wind and almost crashed out of the race.

He was the only person who could deny Hamilton the driver’s title. However, the car had better of him.

Bottas has six spins during the Turkish Grand Prix, and to make it worse, he was lapped by his teammate Lewis Hamilton.

From the moment he ran deep into Turn 1 and fell to the back with his first spin, to the last spin in which he helplessly looped onto the run-off exiting Turn 1, Bottas looked completely bereft of any confidence.

Williams took a big gamble and started the race on intermediates.

While George Russell made them work, Nicholas Latifi did not. He struggled.

He was off the pace of the rest of the field and was soon lapped by the race leaders.

This must have been the most disappointing day for Lance Stroll.

He had taken pole on Saturday, and had also lead for most part of the race. It was possible to imagine him taking victory.

But that was never to be. The tyre usage which had helped him on Saturday counted against him today.

He took perhaps just a little too much out of the first set, was forced to pit and he could get the pace at all on his second set of inters.

It all just slipped away from him and what began as a glorious-looking race ended with an anonymous ninth.

As the Renault team went into the Turkish Grand Prix, they were third in the constructors’ championship.

However, they performed badly and the one point from Daniel Ricciardo was not enough at the end of the race.

The team lost 19 points to Racing Point, 14 points to McLaren and 26 points to Ferrari in the battle for the third in the constructors’ championship.

Renault slid to 5th place in the championship.

What to Expect During Turkish Grand Prix in 2021

In 2021, the formula one race in Turkey promises to be different and with new opportunities for an exciting race.

Due to a very slippery track last year proved to be a very dramatic and unpredictable. This was a consequence of new track surface whose impact was increased by the rain.

Many drivers were caught unawares, leading to some making mistakes and others managing to show they were in control.

This year, the teams are going to use softer tyre options, according to Pirelli.

Racing is also taking place a month earlier meaning the temperatures are expected to be high. This presents a whole set of conditions and challenges to teams as well as drivers.

You are therefore going to witness a higher tyre wear compared to last year.

With the continued fight between Mercedes and Red Bull, racing at the Turkish Grand Prix will provide another opportunity for Hamilton and Verstappen to fight for the title.

In 2020, under the wet and slippery conditions, it was Lance Stroll who managed to put his Racing Point to the pole position.

However, in 2021, it was Lewis Hamilton who took the pole position after a frantic qualifying session.

This was good news for the world champion because he limited the damage that would be caused by his grad penalty. With the pole position, he started P11 with Bottas starting first, and Verstappen second.

It was the best possible scenario for Mercedes.

Coming to Turkey, it was becoming a bit clearer that Mercedes would need an additional engine on Lewis Hamilton’s car. Not doing so would have huge consequences.

A retirement, when the title race is so close, would be very damaging to Hamilton and Mercedes F1 team. In this case, a grid penalty is a better of the worst options they have.

This particular move was made possible because Mercedes has switched the ICE for the Turkish Grand Prix. Only the combustion engine was replaced in the W12 of the seven-time world champion.

Hamilton has been moved onto his fourth internal combustion engine (ICE) of the season, one more than is permitted in the F1 regulations.

But as that is the only element that has been changed on his power unit (PU). Hamilton is set to avoid the back-of-the-grid start that title rival Max Verstappen served at the last race in Russia.

The exhaust has been replaced, but this does not result in any further penalty for Hamilton. The season has seven races left.

Whether the parts will still be replaced will mainly depend on the course of the rest of the weekend. For example, if Hamilton has a mediocre qualifying and only finishes fifth, it is a lot more attractive to just replace all components and start from the back of the grid on Sunday.

Suppose Hamilton manages to grab pole position in qualifying, he will be allowed to start from P11 with the current state of affairs. The drivers between second and 10th will then benefit from Hamilton’s penalty.

In conclusion, the return of the Turkish Grand Prix on the formula one calendar is a welcome idea. it has been a while since F1 raced in Turkey.

As you have seen, the race provides you with a great opportunity to enjoy an interesting race.

In 2021, the conditions are different. For one, the racing is taking place earlier which means the weather will be different.

Pirelli are predicting that temperatures will be high and this will provide different challenge to drivers and the cars.  To this end, the tyre provider has allocated softer compound tyres for the race this year.

It will be interesting to see how the F1 drivers, and also the cars respond to the warmer or hot weather conditions.

The track surface is also different. It should not be as slick as it was in 2020.

If you want to find out if the Turkish Grand Prix is a true show of driver vs car, you should not miss the race at the Istanbul Park.

Recommended: Which F1 Drivers bring Sponsorship Money to the Teams?