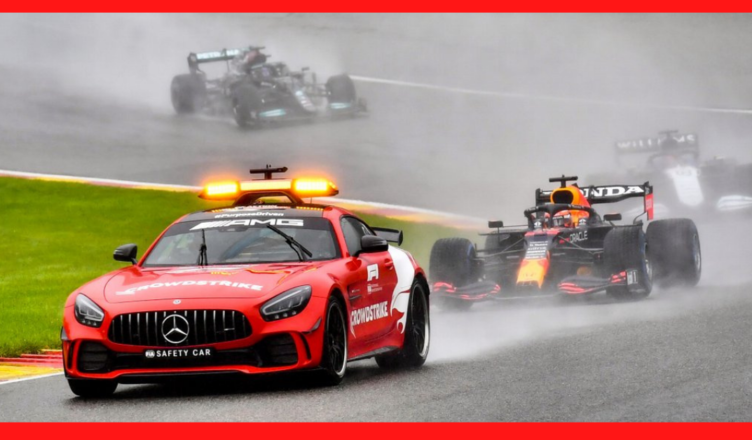 As a fan of the formula one racing you must have witnessed what I would consider to be the shortest F1 race in history.

This happened at the Belgian Grand Prix in 2021. It was a race where Max Verstappen registered victory in the shortest time period.

In reality, this was a crazy and absurd afternoon as torrential rain battered the Circuit de Spa-Francorchamps in the Ardennes Forest.

This provided the best setting for the making of the shortest formula one race in history and the only F1 race that had no green flag laps.

The classification was taken after two laps, which were completed over three hours after the scheduled start time, as the relentless heavy rain and mist made visibility unsafe for racing in a region that was recently affected by devastating flooding.

Belgian Grand Prix in 2021 at Spa-Francorchamps is considered the shortest F1 race in history.

This was caused mainly by too much rain that made the visibility on the track impossible.

Under Formula 1 regulations, half points are awarded if drivers do not reach 75 per cent of the planned distance, but they must complete two laps.

Three laps were run under the Safety Car before the red flag was terminally flown, but due to the mechanism of the regulations the results are taken back two laps to the end of lap one.

However, half points are still awarded.

At the Belgian Grand Prix in 2021, it was only the sixth time in Formula 1’s 72-season history that half points were awarded.

The last time this happened was in 2009.

That shortest race mark was previously set in Australia in 1991. That day, 14 out of 81 laps were completed, lasting about 24 minutes.

It was a race that was started, red-flagged and racing was never resumed.

The official race classification document states the final race distance was less than the length of a lap – 6.88 kilometres instead of 7.004km.

This is because there is a 124 metre offset between the start and finish line which has to be accounted for. So this was the race which last less than a lap.

Formula 1 has not officially credited any driver with the fastest lap for the shortest race in F1 history – Belgian Grand Prix in 2021.

This is likely because the only lap which was officially completed commenced in the pits, and ran behind the Safety Car. There has never previously been an F1 race where no driver set the fastest lap.

When the points were awarded, Max Verstappen win put him level with Stirling Moss. The two now share the record for the most grand prix victories without a world championship title.

The biggest winner of the race was George Russell. He was able to put his Williams on the front row of the grid for the first time since 2017.

The shortest race in formula one history provided him with an opportunity for a podium and points for second place.

It must be the easiest points George Russell has ever scored in his formula one career.

Only two laps of ‘racing’ was completed under a Safety Car. This makes the Belgian Grand Prix in 2021 the shortest F1 race ever in history.

The sheer volume of rain was shocking. F1 teams would have been better off boating around Spa than running their extreme wet tyres.

Ultimately, Verstappen ended up closing the gap to Hamilton to just three points. This is mainly thanks to his stellar qualifying performance on the previous Saturday.

George Russell who had an equally stellar Q3 time ended up second. He split the battling Red Bull and Merc drivers.

That was George’s first ever F1 podium.

In conclusion, Belgian Grand Prix in 2021 turned out to be the shortest F1 race in history.

It demonstrated how weather can deny you an opportunity to watch a formula one race.

The race also opened up the discussion as to whether the F1 rules should be changed. Many fans felts that the way points were awarded did not represent a fair race. That no one deserved to get any point.

I do not know how you feel about that.

However, no one was to see a repeat of Belgian Grand Prix in 2021 in the future.