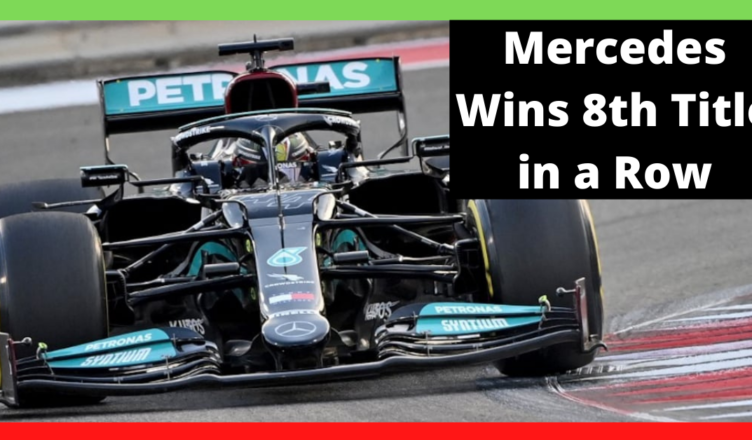 Mercedes wins constructors championship in 2021. It is now the first F1 team to win the title in eight years in a row. This is an extension of the record the team holds since 2014.

In 2021, the competition for the title involved Mercedes and Red Bull. It was exciting as Red Bull racing team threw everything at trying to defeat Mercedes F1 team.

It was an year where history would have been made in one way or the other.

These two teams were fighting for both constructors’ and drivers’ championship titles.

Each team wanted to win both, or at least one of the titles. As it turned out, Mercedes won F1 constructors’ championship in 2021.

As the teams arrived for the final race at the Yas Marina circuit, Mercedes held a 28-point lead over Red Bull.

Mercedes had 546.5 points to Red Bull’s 541.5 points. With Sergio Perez retiring in Abu Dhabi from the race, Red Bull had no way of defeating Mercedes for the title.

In conclusion, this is the first time in the hybrid era has the constructors’ title come down to the season’s finale.

Mercedes came into the race with a lead over Red Bull F1 team, their championship rival.

However, this was the final race for Bottas with Mercedes. In 2022, he moves to Alfa Romeo, to replace Kimi Raikonnen who has retired from F1 racing.

This clears a path for an all-British driver line-up for Mercedes with George Russell taking Valterri’s spot.

It is good to point out that while the team won the constructors’ championship, they are still fighting for the drivers’ title.

The feeling is that Hamilton was robbed off his victory.

Controversial decisions made by the stewards and race director influenced the team’s decision to lodge a complaint and an appeal to overturn Verstappen’s maiden win.