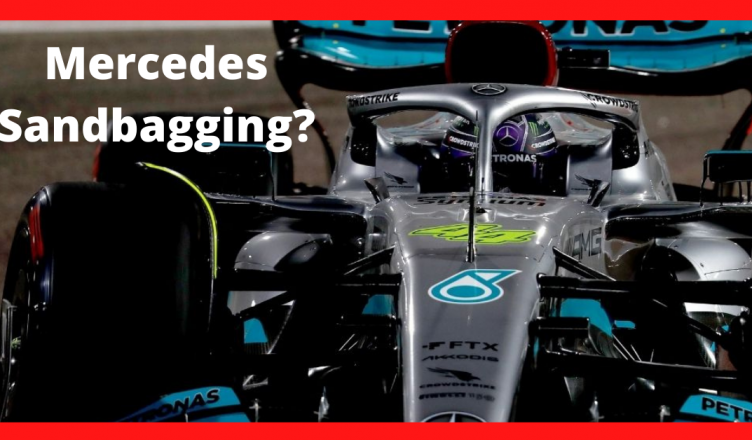 During pre-season testing in Bahrain, Mercedes shocked the world by turning up with a car without sidepods. However, the car was not fast compared to Ferrari or Red Bull. This left some wondering; were Mercedes F1 team sandbagging in Bahrain?

If you are a regular formula one fan, you know this is not new.

Mercedes are always accused of sandbagging.

In fact, it would be a shock if the entire pre-season testing ended without the team being accused of sandbagging

Therefore, it is not a surprise that some fans, and even others in the paddock entertained this idea.

As the weekend progressed, you could hear them ask; are Mercedes F1 team sandbagging or are they truly struggling?

Pre-testing session in Bahrain provided a mix of results. Some teams performed well, and others had their fair share of struggles.

The question of sandbagging in formula one is as old as the sport.

You need to understand what it is and how it works.

I have created a resource that covers this topic in detail, and you can click on the link below to read more.

Read More: What is Sandbagging in Formula 1?

By the time you finish reading it, you will have a full understanding of what sandbagging is, and how it works in F1 racing.

According to Lewis Hamilton, Mercedes are not sandbagging during the 2022’s pre-season testing in Bahrain.

The team closed the second day of testing with over half-a-second on Ferrari’s best time.

Over the cause of the testing in Bahrain, Mercedes struggled with pace.

They are behind Ferrari and Red Bull. Hamilton and Russell think they might even be behind Mclaren.

So, are the Mercedes struggling or are they sandbagging?

It is possible you are wondering the same.

The answer is that no one knows at the moment. It is possible that they are sandbagging.

However, it could also mean that are in trouble when it comes to extracting full potential from the W13.

You will know the true position during the first race of the season in Bahrain.

In the past, Mercedes have been in the same situation, only to turn up and win the opening race of a season.

What Does Mercedes Sandbagging Mean?

When it comes to sandbagging in formula one, Mercedes are often accused of using this tactic in pre-season testing.

It is not difficult to understand why.

For example, during the 2019 season, Ferrari had an advantage over Mercedes during testing in Barcelona.

However, they went ahead to win the opening race at the Australian Grand Prix. Valteri Bottas won that race, with Lewis Hamilton coming second.

So, what does Mercedes sandbagging mean?

It means that the team is hiding their true pace, giving the other teams a false sense of security.

You can argue that it means the team is using a deceptive strategy to make others think they are in trouble, and are not competitive.

With Mercedes seemingly being over half-a-second down on the Ferraris over a single lap, many believe that they are sandbagging.

Hamilton Says Mercedes are not Sandbagging

As noted during testing in Bahrain, Mercedes are over half-a-second down on the Ferrari over a single lap.

However, many people have accused the World Champions of sandbagging.

This means some still believe that Mercedes are not showing their true pace during testing in Bahrain.

When you consider they ended up being quickest in Barcelona earlier, it is possible they have the pace but are not showing it in Bahrain.

If they are, it has certainly shifted the weight of expectation, with all eyes now on Ferrari.

But Hamilton has denied those accusations, suggesting that what fans are seeing is the real Mercedes car.

“Yeah, I mean, we’d be really, really, really good if we were having all these oversteer moments and having this tacky driving just to hide our cars,” said Hamilton, with a laugh.

“It’s not the case, no. We definitely have things that we’re trying to get through.

“I think, as I said, the others are struggling less, but who knows? Maybe when we get to next week, we’ll have a better understanding.”

Why I think Mercedes is Sandbagging

As i mentioned earlier, I look at sandbagging as a business strategy. One that is used by F1 teams during testing to hide their true positions.

While Mercedes have claimed they are not sandbagging.

Lewis Hamilton has also told us that they are not sandbagging.

The ultimate sandbagging would be to convince everyone that you are not sandbagging.

I think Mercedes have done a good job in disguising their poor performance.

For a team that fired up the W13 in December, 2021, I do not think or believe that they do not understand their car.

In conclusion, the idea behind sandbagging stems from the art of deception in business, and in formula 1.

Formula one teams use deceptive tactics to hide their true performance in testing.

Mercedes F1 team has been accused of sandbagging in the past.

It is not a wonder that you might be thinking Mercedes were sandbagging during pre-season testing in Bahrain.

However, you will only know if they have been sandbagging after the initial two or three races.

This means you should watch their performance in Bahrain, Saudi Arabia and during the Australian Grand Prix.