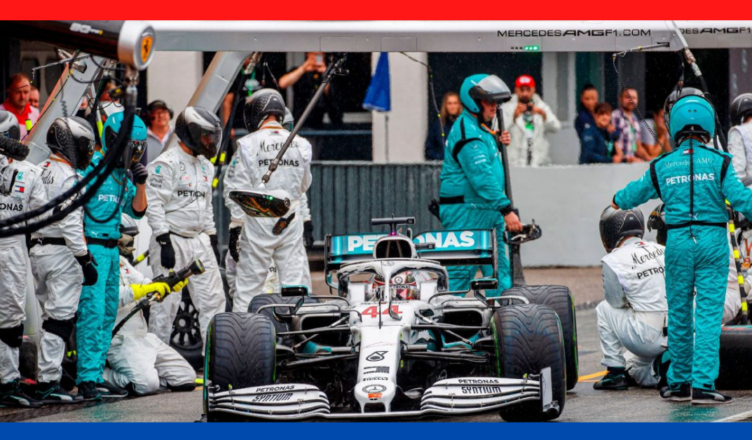 In formula one racing, the pit stops play a significant role during the entire race weekend. There have been great moments, and pit stops have produced some disastrous moments too. The team or the pit crew is composed of several members. Today, I know you would like to know how many people are in the Mercedes F1 pit crew.

It is understandable to have an interest in Mercedes F1 team’s pit crew.

As a team, and especially during the hybrid era, Mercedes have been the most successful formula one team. Winning seven constructors’ titles is not a mean task.

It does mean the team is doing something right.

One of the key components of their success has been the pit crew. That is why today I am going to share with you the number of people who are in the Mercedes F1 pit crew.

How Many People are in the Mercedes F1 Pit Crew?

Mercedes F1 pit crew has about 21 people. These are the people who change the tyres, repair the front wing or nose if the car has a crash.

You might be wondering how that can be the case. Let me explain.

If you start with the tyres, a team of three takes over the job of switching a tyre. One mechanic holds onto the wheel gun; as he unscrews the bolt, the other mechanic removes the used tyre, while the final crew slots in the new tyre.

Since there are four tyres on a car, the number is already up to 12.

Then, there is the team of two, who lift the car using the special trolleys. One mechanic lifts the back of the car, while the other, the front. There is also a spare mechanic, who is ready to replace any one of them in case of inconvenience.

Another team of two holds either side of the cockpit steadily to prevent any kind of destabilization while their colleagues switch the tyres.

Meanwhile, two other mechanics are assigned to the front wing, and they make necessary adjustments to it.

Finally, two mechanics oversee the operations and also keep an eye on the pit lane. Their signals are vital, as a driver getting away safely after a stop resides entirely on their hands.

What Each of the Mercedes F1 Pit Stop Crew Member Does

One of the questions you might have is, what does each of the pit crew member do during a pit stop?

In this section, I will try and share with you what I have gathered about the role pit stop crew plays during the F1 race weekend.

This is the mechanic who operates the wheel gun to remove and fir the wheel nut.

It is a role played by four mechanics. This means each tyre has one tyre gunner.

The role of the tyre gunner is to operate the pneumatic wheel gun. This loosens the nut that holds the tyre to the wheel of the car.

It then tightens the nut back onto the wheel when the fresh tyre has been fitted.

While they operate much like a wheel gun you might find in your local garage, these are supercharged and spin at more than 10,000 revolutions per minute.

Each garage is prepared with eight guns, two for each wheel in case one fails.

As noted, the wheel gun can fail and the above article shows you one such scenario that affected Mercedes driver Valtteri Bottas.

How a Wheel Gun Operates or Works

The wheel gun is operated with compressed air or nitrogen to loosen the nut.

Once the nut is loose, the gun automatically switches so the next time it is operated it tightens the nut back up.

In the past, the gunner would signal that the wheel had been fitted by lifting a hand above the tyre.

But modern guns now use an electronic system to signal that the tyre has been fitted. If a mistake has been made, the gunner makes an ‘X’ signal by crossing his arms in the air.

This makes the team aware that an error has been made, and the car should not be released or should stop as soon as possible.

An example of this was the 2019 Australian Grand Prix when both Haas cars retired when wheels were not correctly fitted.

These are mechanics who remove the tyres once the tyre gunner has removed the wheel nut.

It is a role played by four crew members, one for each tyre or wheel.

A simple role, but an important one. One member of the pit crew is responsible for pulling the 10.5kg tyre off the car as quickly as possible.

When the car approaches, the tyre off crew member along with the wheel gunner are poised on their mark.

The driver must hit the mark precisely, otherwise, the eight members of the crew will have to re-orientate to complete their task, slowing down the stop.

The people tasked with this role bring the tyres to the pit box and fir on to the car.

It is a role played by four mechanics, one for each of the tyres or wheel.

Once the tyre is off the car, it is the responsibility of four crew members to fit a fresh set to the car.

When the call to pit is given, the pit crew will be instructed which set of tyres to fit to the car.

This should be simple enough but can become confusing during double-stack pit stops, as was the case at the 2020 Sakhir Grand Prix when George Russell was fitted with Valtteri Bottas’ tyres.

Once the car has had the tyres removed, it is this crew members job to fit the tyre as quickly and smoothly as possible.

The person with the front jack lifts the front of the car in the air to allow the tyres to be removed.

It is a role that has two pit stop crew members.

This member of the team uses a special piece of equipment to lift the car in the air from the front.

They stand at the front of the pit box and slide the jack underneath the front wing of the car. By applying their weight to the handle, this lifts the car in the air.

The car is held in this position while the stop occurs, and the front jack pit crew member moves to the side and out of the way of the car. When the stop is complete, the front jack releases and the car drops to the ground.

The pit crew member then moves the front jack out of the way as quickly as possible.

There are two members responsible for the front jack: one main, and one spare. The spare is useful if a pit stop goes wrong, as happened to Racing Point in 2020.

Lance Stroll’s car came into the box too hot and knocked the front jack crew member onto the ground, so the spare stepped in.

Two front jacks may also be used in double-stack pit stops, with one member for each car.

The role of is played by two mechanics. It involves lifting the car in the air from behind to allow for change of rear tyres.

You should know that the rear jack is similar to the front jack. It slots onto the indicator light at the rear of the car.

Most of the F1 teams have a back-up rear jack in case of failures.

This role is handled by two pit crew members. It involves lifting the car in the air from the side to stabilize it.

The two hold the car as still as they can around the cockpit area.

Another role that is important is that they can be called upon to lift the car using the side jack. This happens when the rear or front jacks cannot be used to change tyres.

The role of this pit crew member is to apply aerodynamic changes to the front wing.

It is a role that is played by two people.

During the race, the front wing flaps might need to be changed or adjusted. If you watch races, you might have seen this in various occasions.

The F1 driver usually relates communicates using team radio on the need for wing changes. The engineer then relays that information to the pit crew members dealing with flaps.

It is possible you could have seen a mechanic using a screw to turn a screw on the front wing. This helps in managing oversteer or understeer as driver prefers.

This is the person who gives the signal for the can to be released. It is a role played by one person.

It is important for a lollipop man to get things right. He finds a safe gap in the pit lane traffic to release the car. This also helps to ensure the driver does not impede other cars on the pit lane.

In conclusion, the Mercedes F1 pit crew is playing a big role in the success of the team.

They have perfected the art of the pit stop, and have been instrumental in providing great support to both Lewis Hamilton and Valtteri Bottas.

As you have seen, there a number of people at the Mercedes F1 pit crew, and each person play a distinct role.

When it comes to the pit stop, you will find that about 20 people within the Mercedes F1 pit crew get involved in this critical activity.

Pit stops have evolved over the years. the people who are in the Mercedes F1 pit crew are doing their part to ensure the team win races, and championships.