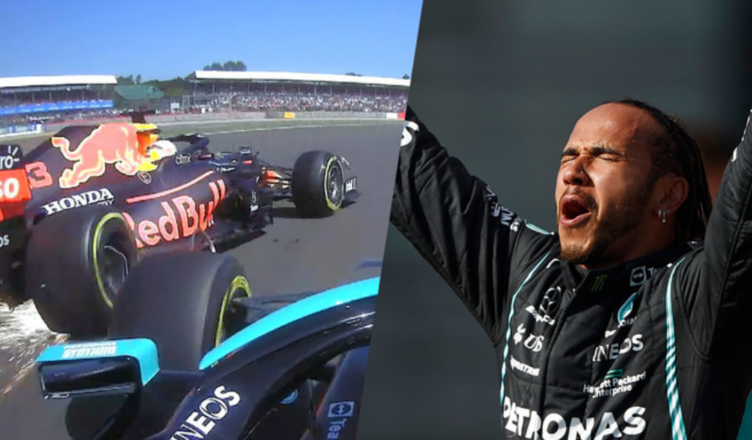 If you are a fan of Formula 1, you enjoy watching drivers and teams fighting for points when racing. It is something that makes F1 racing interesting and fun. Over the years, there has been epic driver’s fight on the track, and some serious crashes too. That is why the Max Verstappen and Lewis Hamilton crash on Lap 1 of the British Grand Prix at Silverstone is worth mentioning.

This has been long coming, given the level of the driver’s competitiveness, and the desire to win.

It is common knowledge within the F1 community right now that Max Verstappen is an aggressive driver.

In fact, most drivers are afraid to have a wheel to wheel combat with him on the track. You are likely to find yourself in the barriers when racing Max, like many drivers have found out.

The title fight this year between Max and Lewis is promising to be very interesting and intense too.

I would argue that this kind of crash has been coming for a while now.

It started at Bahrain when Max overtook Lewis on lap 53. However, he had to give back the position since he overtook Hamilton off the track.

It is possible to argue that it was a matter of when, not if, when Max and Lewis would come into a real contact during racing.

In the 2021 season, Hamilton has been a bit restrained to race Max. He has backed down twice from instances where they would have come into contact otherwise.

Let us take the case of the race at Imola;

Lewis Hamilton started on pole position ahead of the Red Bull drivers at the Emilia Romagna Grand Prix in Italy.

At Turn 1, he had a tussle with Max Verstappen who pushed him off the track as he aggressively took the lead of the race.

As Verstappen held his track position, Hamilton was forced to mount the kerbs, losing a bit of his front wing and the lead.

At this point, everyone praised Verstappen for his aggressive racing.

It is therefore a bit interesting to listen and read about the Verstappen and Hamilton crash at Silverstone.

How Verstappen and Hamilton Lap 1 Crash at Silverstone Happened

The British Grand Prix in 2021 did not disappoint in high octane racing and drama.

As a fan, you did not have to wait long for the dram to unfold. It took the first lap as the championship rivals Max Verstappen and Lewis Hamilton to tangle for the lead.

This sent Max Verstappen into the barriers at 180mph.

Watching the tussle from turn 1 and through turn 6 was breathtaking. It was fun and probably what formula one was looking for between these two supremely brilliant drivers.

The Verstappen and Hamilton crash occurred at turn 9, popularly known as Corpse Corner.

Approaching the flat-out right hander, Hamilton pulled alongside Verstappen and as they rounded the Copse corner, the Mercedes on the inside racing line tagged the rear of the Red Bull, sending it through the gravel on a collision course with the tyre barriers.

Charles Leclerc took over the lead amid the Max and Lewis drama. It was a lead he would hold onto after the restart to Lap 50 when Hamilton overtook him.

It turned out to be that the race boiled down to a boilingly brilliant  last three lap of the grand prix as Hamilton passed Leclerc on lap 50, and went on to win his 8th British Grand Prix in style.

It is worth to note that Hamilton overtook both Lando Norris and Charles Leclerc at the same Copse corner without incident.

This is something that Michael Masi noted in his comment saying;

“Similar to what happened with Charles Leclerc later on, he could have stayed tucked in closer apex, and that was where they found the issue. I think the wording was clear as per the regulations, he was ‘predominantly to blame’, not ‘wholly to blame’ for it”

This was in regard to the 10-second penalty that was given to Hamilton by the stewards.

In conclusion, the Max Verstappen and Lewis Hamilton crash at the British Grand Prix is going to increase title fight intensity.

It is good for the F1 fans, because you are now going to see real racing between Lewis and Max.

Formula one is a serious and a dangerous sport. It is important that driver’s give each other space when racing to avoid incidents.

This also shows that Lewis Hamilton is not ready to give up the 8th driver’s championship. He is on the hunt, and he has demonstrated he is ready to also get aggressive when need be.

I strongly feel that this was necessary. As a world champion, Hamilton has been very ‘soft’ when racing Max.

It is my view that doing that provided room for Max to think that everyone is afraid of racing him hard.

The crash at the British Grand Prix provides a reality check for all F1 drivers on how they race. I hope Max Verstappen will also consider his driving style when on a wheel-to-wheel racing in formula one.