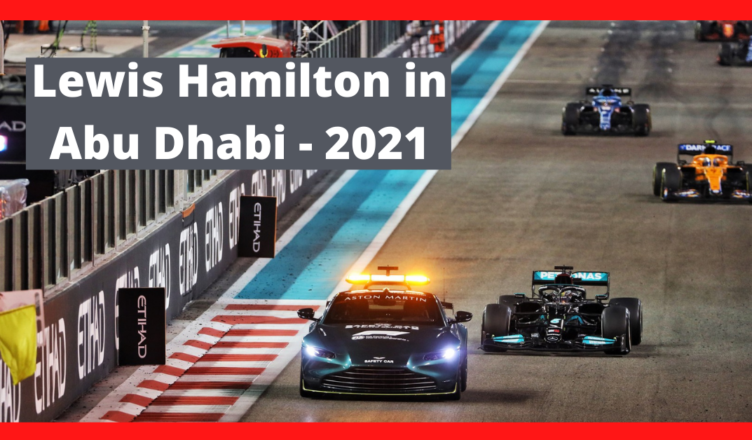 It is impossible to describe what the world witnessed at the end of Abu Dhabi Grand Prix in 2021. You can feel it, the anger, disappointment and disbelief among F1 supporters across the world. Watching Lewis Hamilton during Abu Dhabi in 2021 was breathtaking.

Some of Max Verstappen’s fans admit something went wrong at Yas Marina Circuit. This is a clear indication that FIA and race director bungled the race, probably for the television ratings.

It is a sad ending of what had otherwise been a great and wonderful F1 season.

The truth is, you and I would have gotten only one world champion at the end of the Abu Dhabi Grand Prix. It was expected, and am sure you had no issue with that.

What millions of people across, including myself, have an issue with is what seems to be a clear attempt to ‘manipulate’ the race as Hamilton said on his radio in the last lap.

From the start, Lewis Hamilton dominated the race. Max and Red Bull had no answer to his speed on the track.

Even when Max stopped to change his tyres, Mercedes were able to respond with Lewis and still remain in front.

While Red Bull kept Checo out to try and slow down Hamilton, he still ended up being ahead of Verstappen.

It is a position he held until those last few laps.

The reason you and I are talking about the Abu Dhabi Grand Prix can be reduced to this one incident.

A William’s driver accident is what triggered a safety car, and the sequence of events that followed.

Max pitted for new soft tyres. Unfortunately, Hamilton did not, and Mercedes felt they could not throw away the lead.

It made a lot of sense. At that particular point, it was almost clear that the race would end under a safety car.

In fact, even Crofty said as much.

In appreciation for the accident, Christian Horner promised Nicholas Latifi an endless supply of Red Bull.

Related: 5 Ways on How Red Bull Racing is Funded

This might continue to fuel the speculation that the 2021 championship was ‘fixed’ in favour of Max Verstappen.

The race director, Michael Masi, is a man who is under a lot of criticism. You can understand why.

Earlier in the race, Red Bull and Christian Horner were complaining to the race director.

However, his biggest mistake was yet to come, and it did on Lap 57.

Initially, he had instructed that no lapped car would be allowed to un-lap. This made a lot of sense.

To many, and I suspect you feel the same, this looks like it is against the sporting regulation.

Wave All the Lapped Cars Past – Precedence

During French Grand Prix in 2020, Michael Masi is quoted saying this about Safety Car;

“There’s a requirement in the sporting regulations to wave all the lapped cars past.

From that point, it was position six onwards that were still running on the lead lap, so between 10 or 11 cars had to unlap themselves.

Therefore, the Safety Car period was a bit longer than what we would have normally expected”

This would mean the race director knew what he was doing during the Abu Dhabi Grand Prix in 2021. It was a deliberate act of trying to provide a show for the TV, instead of a sport.

I cannot remember of a time where only a section of lapped cars were allowed to un-lap.

Also, I have not seen a situation where the safety car comes in before the un-lapping cars have caught up with the train.

It was strange, and very suspect. I do not care if you are a Max or Lewis fan, this was embarrassing.

Effectively, this cleared the way for Max Verstappen to get close to Hamilton who was on 40-lap old tyres. Max was on fresh soft tyres.

At this point, it was a matter of time before he overtook Hamilton, and went on to win the race as well as the drivers’ championship.

I feel like Hamilton was punished for being great. He was cheated out of the win by the race director.

He dominated the race, except for the few laps that Checo led. Max could not match Hamilton’s pace at any single point during the race.

To drive so well, and to have a huge lead over your competitors, and only have the race director create what felt like own rules, is very disheartening.

It is sad for Hamilton, and it is understandable he is disappointed. For F1 fans like you and I, it is equally a sad thing to watch.

One of the messages which were not broadcasted included Hamilton’s radio message on the last lap.

He came on and said they are ‘manipulating’ the race. Your guess is as good as mine by what he meant by this.

After that, he did not speak. He said nothing on his in-lap. He parked parc ferme and sat in silence for a long period of time, deciding not to go to the grid.

When he came out and went for the interview, Hamilton’s first words were;

That demonstrate the kind of a person Hamilton is – gracious in defeat.

My heart goes out to Lewis Hamilton, one man that has to find the strength to fight against injustice in the entire F1 sport, not just for him, but for others as well.

It was cruel that after fighting for the win on the track, the FIA and the race director still found a way to take it away from him.

In conclusion, it is clear that something went wrong at the end of F1 season in 2021.  To see Lewis Hamilton during Abu Dhabi in 2021, and to lose the race in such manner left a bitter taste in people’s mouth.

Having fans, of both Hamilton and Verstappen agreeing that

Irrespective of the team or the driver you support, the key idea here is that formula 1 require changes. There needs to be consistency on the application of sporting regulations.

Having a 6000-page document rule book does not make sense when rules can be made ‘at the discretion of the race director’.