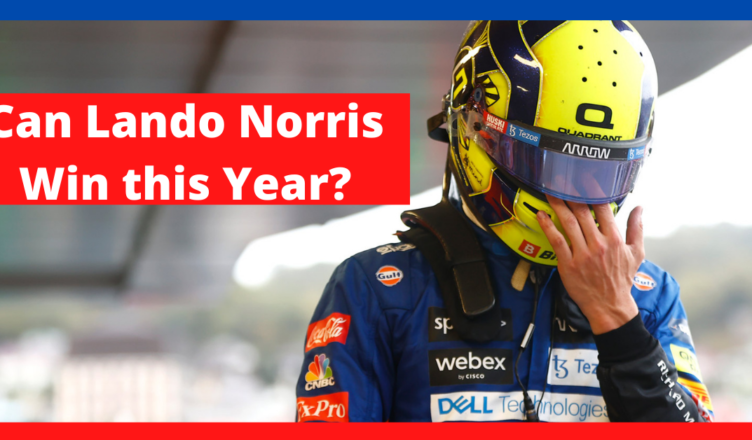 Lando Norris has been performing very well during the race weekends, and especially on Sundays.

Over the last couple of seasons as a McLaren driver, Lando is proving to be a good racing driver. People are noticing, including the world champion Lewis Hamilton.

The fact that Lando Norris sit 4th in the drivers’ championship in 2021 F1 season is proof of how good he is as a driver.

He has been phenomenal so far. It is possible that he will only improve in the coming races or seasons.

The 21-year old Briton is good.

It was not surprising to see him command the Russina Grand Prix, and even hold Lewis Hamilton in the last stages of the race.

That was before the rain came and he miscalculated. It was a mistake that would cost him and drop him to seventh.

However, it was great to hear him say he would learn from such an experience. That is the kind of attitude you only find with winners.

If you are still wondering whether this is the year Lando Norris wins a race, I suggest you be patient and watch as the season unfolds.

You could have a surprise race performance from Lando Norris.

Is This the Year Lando Norris Wins a Race?

The simple answer is that this could be the year Lando Norris wins a formula one race. With six races remaining, maybe he is going to win one of them.

By the end of this season, you will have the answer as to whether this is the year Lando Norris wins a race.

Lando Norris was about to have his maiden win in formula one, until the rain happened.

If you are an F1 fan, I am sure you know what happened in Sochi, during the Russian Grand Prix in 2021.

Rise and Rise of Lando Norris

Norris’ rise has been rapid. His opening season in F1 was solid, the Briton impressing early doors with sixth in only his second race and while beaten by more experienced team mate Carlos Sainz on points, he did edge the qualifying head-to-head 11-10.

His second campaign was a step on, starting with his maiden podium in the first race and ending the season with nearly double the points he scored the previous year.

He also narrowly finished more races ahead of Sainz, edged the qualifying head-to-head by a race again and only ended the year eight points adrift of the Spaniard.

The 1-2 finish was the best for McLaren in the 2021 season, with Daniel Ricciardo taking his first win with the team.

For McLaren, it was the first win since Interlagos in 2012. You can therefore see why it meant a lot ot Lando Norris.

However, in his post-race interviews, he intimated that he would have loved to go for the win.

In fact, at some point during the race, he complained of Daniel Ricciardo being too slow. His team instructed him to hold position.

Coming second was great for the team, but am sure Lando Norris considered it an opportunity for his maiden win in formula one.

According to Lando, he felt ready to win even before the Russian Grand Prix.

So, is this the year Lando Norris wins a race?

It is possible, and with six races remaining, he could end up winning one of them. This would be the year and the season for Lando to win his maiden race in F1.

It has been long coming. You can see it in how he drives, and how his performance has improved over the seasons.

He had an impressive performance in Russia, and was poised to win the race.

However, a strategic mistake towards the end of the race turned an otherwise great race into a nightmare result for the British driver.

With changing weather conditions in Sochi, Lando Norris opted to stay out on dry tyres while everyone else changed into intermediate tyres.

As the rain increased, he struggled to control the car and plummeted to position seven.

The Mclaren driver has shown great promise and has come close to winning a race this year.

As I mentioned earlier, Monza was his best chance as he finished second to his teammate Daniel Ricciardo.

Now that he has been in a winning position in Formula 1, with Lewis Hamilton pressuring behind him for a significant portion of the race, Norris said he has now been in a place in which he knew he was ready to be in all season long

In conclusion, there is a great deal of interest and support for Lando Norris to win his first race this year.

And there is a reason for that.

I consider Lando Norris to be one of the best and good-hearted person on the grid. He is likable and such a great guy in person.

Is this the year Lando Norris wins a race?  I honestly do not know, but he has been close to winning.

Lando Norris was second in Monza, and almost won the Russian Grand Prix.

That shows that he is very close to winning a race, if he can continue with the performance he has displayed lately.