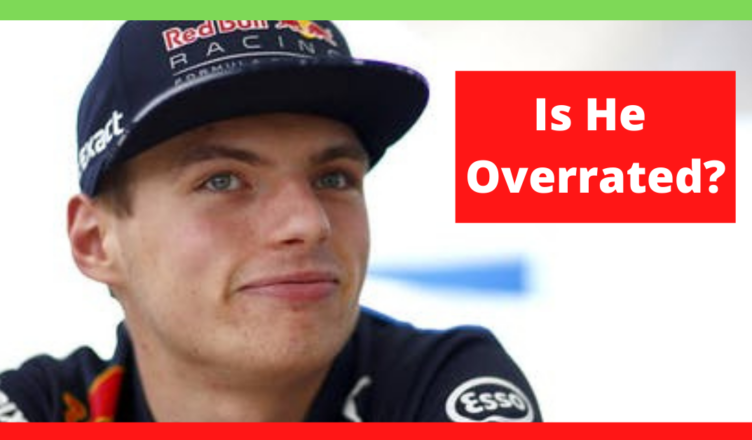 As a formula one fan, I have a great deal of admiration on several f1 drivers. You can see the raw passion and desire to win. They are like animals looking for prey each time they step into their f1 cars. One such driver is Max Verstappen. However, I cannot help to wonder, is Max Verstappen overrated?

In this article, I will look at the career of Verstappen so far. From this, you will look into whether he is overrated or not as a driver.

As I do this, I must admit that Max Verstappen has demonstrated a great deal of improvement as a racing driver.

From the time he joined the Red Bull junior program, he has improved in performance.

Infact, in the 2021 formula season, he is considered a contender for the title driver championship. He is fighting for this with the seven world champion Lewis Hamilton.

Even with this kind of situation, is Max Verstappen overrated? Let us discuss further.

I do not think that Max Verstappen is overrated from the simple definition of the term.

If you think about it, being overacted means there is hype around Verstappen, and he does not live up to the hype.

However, that is not the case. At the moment, Max Verstappen is delivering on the track. His performance is very good.

With a better Red Bull package, he has been able to take the fight to the Mercedes and Lewis Hamilton.

In this regard, and from my personal opinion, it is likely that Max Verstappen is not overrated.

However I know there are people who hold a different opinion.

Why some consider Max Verstappen to be a great driver

It is easy to see why you might think that Max Verstappen is great today. He is in his best form yet, and is performing better than many expected this year.

As the 2021 season comes to a close, he is the only driver who has given Lewis Hamilton a run for his money.

You can argue that Hamilton has not had a good challenge over the last couple of year. The only time he had another driver challenging his dominance was in 2016, by Nico Rosberg.

It is possible to argue that Max Verstappen is not the best or the greatest driver in Formula one right now. However, he is providing a glimpse of the value he brings to the sport and to Red Bull.

Hamilton remains one of the greatest F1 drivers of all time.

In this regard, you might conclude that Max Verstappen is overrated. Putting him at the same level as the other world champions is a bit of a stretch.

You need to give him a bit more time, and a few more seasons to proof his greatness. Verstappen is talented and a well-rounded driver.

As we try to figure out if Verstappen is an overrated driver in formula one, it is interesting that he cannot name any driver who is overrated.

This comes from playing a word association game based on motor sport.

Max Verstappen was given the word ‘overestimated’ and he was lost for words.

This was his response; “Overrated, that is a really tricky one. You cannot name a driver, I don’t know what to choose.”

Most Overrated Drivers in F1 History

F1 has produced some of the finest drivers in the world, who have been given their due credit and acclamation, such as Ayrton Senna, Michael Schumacher and many others.

There have also been drivers who come under the “underrated” drivers who have never been given the credit that they deserve. Then, on the other end of the scale there are the overrated F1 drivers, who failed to justify their hype or just paid their way through the sport.

The drivers that come to mind include the following;

It is interesting to note how and where you would consider or place these drivers.

In conclusion, it is interesting to read and find what some in the industry think about whether Max Verstappen is overrated or not.

Jacques Villeneuve, who is a former F1 world champion, claimed that Max Verstappen is a ‘child’ and considers him ‘overrated’.

That is interesting coming from an experienced formula one driver. It is possible he argued his sentiments based on Verstappen’s temperament.