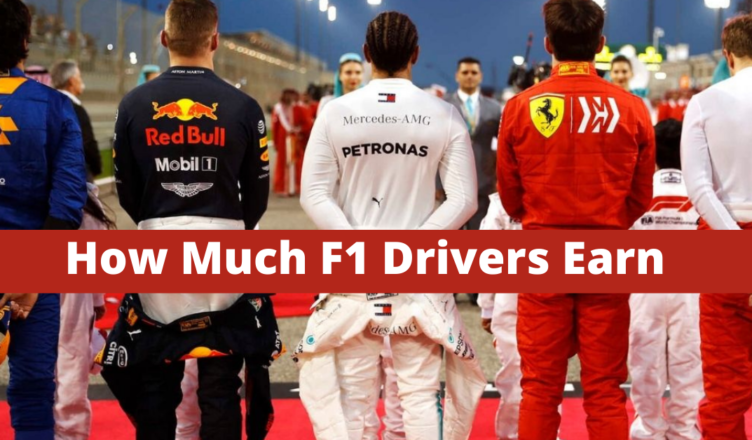 Watching formula one racing is fun and enjoyable. This is true if you are a fan of the sport. Besides the teams, formula one driver is the other most popular figure in the sport. It is estimated that a driver makes a lot of money, but exactly how much do F1 drivers earn from their teams?

You might be curious how F1 drivers make or earn their money. You might have seen their flashy lifestyles, posh homes and expensive high-end cars that they drive.

This would make anyone stop and want to know how much an F1 driver earns from their teams.

To understand this, you would need to know how formula one makes money, and how the teams compensate their team members. Drivers are some of the key cost item in the expenses of running a formula one team.

Formula one is a business. You would be wrong to think of it any different.

Related: How Formula One Makes Money

Therefore, if you are running a business, you need to under all your key expenses. When you look at the balance sheet of a formula one team, driver’s salaries and payments is one of the top operating expenses.

It is important to be keen on how much an F1 drivers earn from the team, especially in the new era of cost-cutting.

Based on how much an F1 driver earns from their team, the way they spend their money is equally interesting.

You have seen them, flaunting their wealth. It is attractive and it is possible you admire such lifestyle.

Making money in formula one as a professional driver is one thing. It is another thing to manage and spend that money.

Every person wants to have a good life, and F1 drivers are known to enjoy the fine things in life, or so it seems.

They live in some of the most expensive cities like Monaco. F1 drivers own high-end cars and posh homes in prime locations.

If you watch their lives, you would realize that money is not one of the problems.

So, how do the f1 drivers spend their money that they earn?

There are different ways that a formula one driver spends their income. It is possible you will be able to know a few of the things they own, but it is also possible there are a lot of things you might not know.

For example, everyone knows that Lewis Hamilton owned a private jet. He has since offloaded it.

The drivers have financial advisors and legal attorneys who help them manage their income and investments.

How F1 Drivers are Paid

In formula one racing, drivers are an important component of the entire team. They are the people you might know, because they are driving the formula one car.

In terms of compensation, drivers are paid in different ways, but mostly from a salary and other benefits or bonuses which include commissions for achieving hitting milestones.

In this regard, you can conclude that F1 drivers are paid into main ways;

The amount each driver makes depends on the agreement he signs with the team.

Formula 1 is the pinnacle of motorsport, and the 20 drivers participating in the series are considered the best drivers in the world.

They risk their lives in each session of the Formula 1 season, all in the hopes of being crowned as the world champion. A case in point is the Max Verstappen and Lewis Hamilton crash during the British Grand Prix.

Therefore, it should come as no surprise that Formula 1 drivers earn more than drivers in other series around the world.

You should also know that money generated from TV deals and sponsorship ensures that Formula 1 drivers are the highest paid in motorsport.

How much F1 drivers Make  from Motor Racing

A driver earns based on their perceived value to a team, and also on experience.

As you might imagine, F1 driver salaries can be extremely high. However, you should also consider the risks involved in the sport.

When that is put into consideration, you might find it difficult to argue against some of the money the drivers make or earn per year.

Over the course of year, formula one drivers have continued to earn high incomes from motor racing.

In this year’s season, the top ten highest paid F1 drivers are;

This is just an indication of how much F1 drivers earn from their teams, and the structure of the earnings.

In conclusion, once you know how much f1 drivers earn from their teams, you will be able to understand why they work so hard.

To an F1 driver, racing is work. It might seem like just fun, and probably they truly enjoy what they do. However, it is work and they put in long hours training and ensuring they remain in top form.

F1 drivers earn most of their money from salaries and bonuses paid by the teams. These are contained in the contracts that the drivers sign with the management of the team they are driving or racing for.

For example, there were rumours about the $50 million package that Lewis Hamilton and Mercedes F1 team were discussing for his contract.

As you have seen in this article, each driver is earns or makes different amounts from their teams.

It is also important to note that the packages they agree on with the teams are different from driver to the other.

However, the new regulations or the regime of cost caps in formula one might influence or change the amount of money a driver earns from the team.