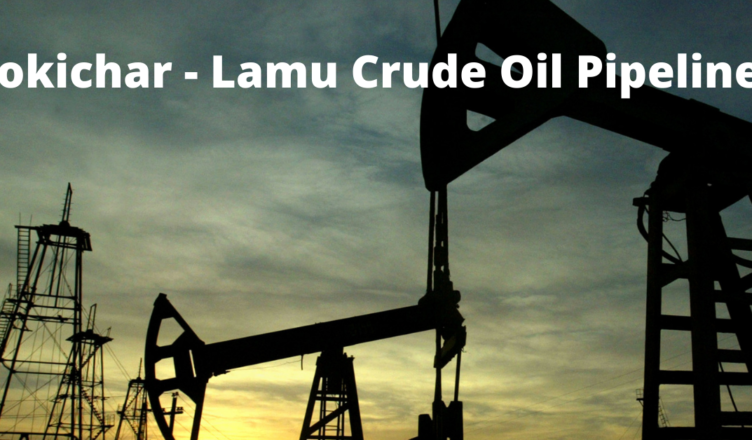 When a country discovers oil or gas resources, one of the key issues is determining how to take the resource to the market. Kenya discovered oil in 2012. This was a discovery made by British firm Tullow Oil. To export the crude oil, there is a proposed crude oil pipeline from lokichar to lamu. I know you might wonder, how long is lokichar lamu oil pipeline?

Oil in Kenya was discovered onshore in the heart of Turkana region, in an area called Lokichar. Ngamia-1 well remain etched in the minds of Kenyans as that was the well where the first discovery was made.

Once the crude oil is produced, the operator will need to use the Lokichar-Lamu crude oil pipeline to transport the crude to the coastal town of Lamu for export.

824 Kilometres. Lokichar – Lamu oil pipeline is 824 kilometres long. It will consist of 18 inch pipelines and will be heated with several pressure pumps along the distance. It will be buried and move across various terrains. This pipeline will move crude oil from Lokichar oil fields in Turkana to the port of Lamu. The crude oil pipeline was first proposed in 2015 by Toyot Tsusho in what was then known as Uganda-Kenya Crude Oil Pipeline. This pipeline will traverse across Turkana, Samburu, Isiolo, Meru, Garissa and Lamu counties in Kenya.

It is important for you to know that this crude oil pipeline is a key component of the Lamu Port-South Sudan-Ethiopia-Transport (LAPSSET) corridor project whose construction is underway in Kililana, Lamu West.

To export Kenyan crude oil, this oil pipeline is going to play a key role. In this regard, the designs for the crude oil pipeline were needed.

British energy service firm Wood Group completed design work for this massive pipeline that will move crude oil from Lokichar fields in Turkana to the port of Lamu.

The Front End Engineering Design (FEED) for the 824km long Turkana – Lamu oil pipeline is one of the assignments undertaken by Wood Group. This has produced two design options with a cost variation of USD$100 million.

According to Wood Group, the first option comprising a pipeline with onshore storage facilities will cost USD$1.2 billion – while one with floating storage will cost USD$1.1 billion.

The onshore storage option involves construction of a small facility and the lease of a very large crude carrier (VLCC).

The crude carrier will have a storage capacity of 1.45 million barrels acting as a permanent store moored at berth three at the port of Lamu.

Offloading will make use of pumps on the VLCC to push one million barrels of crude oil in Suezmax export tankers.

For this option, offloading will utilise large flow pumps to move a million barrels of crude oil from the storage tanks into export tankers at berth three of Lamu port.

According to Wood Group’s report, overall route length has been minimised at just 68km, nine per cent longer than the straight line distance between the start and the finish points.

It is good to the let you know that both FEED, and the Environmental and Social Impact Assessment (ESIA) studies are done.

This is a clear indication that partners in project oil Kenya are keen to ensure that this project does not encounter environmental-related obstacles from conservationists and environmentalist.

The conclusion of the design work now paves the way for the hiring of a contractor to implement the project under an engineering, procurement and construction basis.

It is estimated that the contractor will pocket USD$113.6 million, while the supervising firm will earn about USD$13.1 million.

Kenyan government is not investing any cash into the project. The multinationals prospecting for oil in the country are tasked with raising funds for construction of the pipeline.

This Lokichar Lamu oil pipeline is expected to be completed in less than two years once the construction phase begins. It would be in time for the planned commercial production of oil in Kenya between 2023 and 2025.

Government of Kenya has signed an agreement with international oil companies intended to attract up to $3 billion financing for development of the crude oil deposits in Lokichar.

It is for this reason the lokichar-lamu crude oil pipeline is an important part of the value chain to create value from the oil in Kenya.

A multi-agency team of land surveyors have already carried out the preliminary survey of the entire route the pipeline will take. The survey was to establish the lands that the Lokichar-Lamu Crude Oil Pipeline will pass through.

The 824-km pipeline is a key component of the Sh2.5 trillion Lamu Port-South Sudan-Ethiopia-Transport (Lapsset) Corridor project whose construction is underway in Kililana, Lamu West.

The pipeline will pass through six counties of Turkana, Samburu, Isiolo, Meru, Garissa and Lamu.

In conclusion, understanding the length of the Lokichar-Lamu oil pipeline provides you with a chance to have perspective on the scope of the project.

Tullow Oil estimates that there are about 1.5 billion barrels of proven and probable reserves. This would translate to 60,000 to 100,000 barrels per day of gross production. This would be transported to through the lokichar lamu oil pipeline for export purposes.

In addition to the foundation stage processing facility, the 824km crude oil export pipeline from Lokichar to Lamu will be used to take the oil discovered in Kenya to the market.

According to Tullow Oil in Kenya, infrastructure installed for the foundation stage will be utilized for the development of the remaining oil fields. It will also be used in case of future oil discoveries in the Lokichar region.

This would allow the incremental development of these fields to be completed at a lower unit cost.