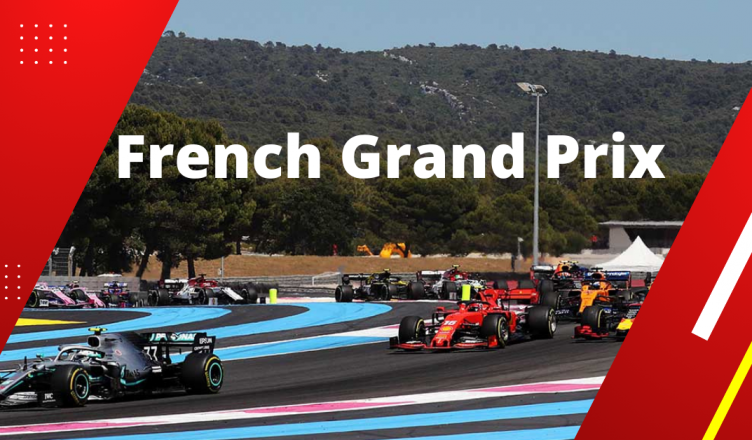 Travelling to France to watch and experience formula one racing should be on everyone’s bucket list. At least it is on mine. But which venue is the French Grand Prix held?

F1 racing has a long history in France. It is one of the iconic races on the F1 schedule today.

As the fans, drivers and teams troop to France for the race, it is important that you understand where the French Grand Prix is held.

If this is your first time attending the race, you will find this resource very helpful.

This is your guide to venues that have hosted and continue to host formula one race in France.

Which Venue is the French Grand Prix Held?

One of the common F1 questions you might wonder about is; where is the grand prix currently held in France?

The French Grand Prix is currently held at the 5.842-kilometre Circuit Paul Ricard in Le Castellet. It is located near Marseille in France.

In 2022, the French Grand Prix will take place over 53 laps at the Circuit Paul Ricard.

To attend a formula one race, you need to have a ticket.

French Grand prix tickets will allow you to access the event, and enjoy racing at the grandstand of your choice.

Tickets for the grand prix at the Circuit Paul Ricard are available at a price range of €160 to €600 per person.

For General Admission, you will part with €160. To access the Main Grandstand, also called Ligne de Depart, you are going to pay €600.

Budgeting to Attend an F1 Race

Like everything else in life, planning is an important aspect of having a successful F1 race as a fan.

This requires planning for the money you will need and spend during a race weekend.

When it comes to buying race tickets, you should have a plan and a budget.

Budgeting is critical to ensure you remain within your financial goals.

Attending a formula one race should not mess your financial or your family’s financial situation.

Figure out the amount you need for the ticket, transport, accommodation and any other possible expense you might incur.

Set that cash aside, or load it into your debit card.

This kind of planning informs your trip to the race track. You will have peace of mind knowing you have not spent outside what you intended to spend.

The experience you get when attending an F1 race depends on where you sit to watch the race.

It is important to pick the right seat when paying for your ticket.

At Paul Ricard Circuit in France, you can choose your grandstands from the following options;

If you get a chance to be at the Champions Club, you will have the privilege to watch the race on a permanent structure on the inside of Turns 14 and 15.

This grandstand offers views of the Pit Entry and the Main Straight at the circuit.

You have the option of sitting inside or on the terrace.

Guests are treated to an all-inclusive hospitality including snacks, meals and an open bar.  You also get F1 drivers appearances.

Being at the Paddock Club basically puts you in the heart of the action at the Circuit Paul Ricard.

You will get gourmet lunches, fine wines and open champagne bars.

As a fan, you get to watch the race from a panoramic rooftop terrace with views of the Main Straight.

Paying for this package will also get you a chance for daily pit walks, guided paddock access and F1 driver appearances.

Getting to access this grandstand provides you with the starting grid and pit boxes views.

To many, this is the best location if you are attending the French GP for the first time.

You get to watch the pit action, race build up, start and finish.

At the Circuit Paul Ricard, this is the only covered grandstand. This helps you to stay out of the sun and heat.

One of the highlights of the French Grand Prix includes the series of slow-speed corners.

It is great to watch the new-generation F1 cars take the corners, which are critical to good lap times at the track.

Saint Baume covers four grandstands which are clustered around Turns 5 and 6.

For a while, the French GP had been stopped.

However, the Mistral Straight at the Circuit Paul Ricard had a chicane added for the return of the race in 2018.

The entry to the chicane is a good overtaking spot.

If you get a seat here, you are going to get an opportunity to take some good pictures of the F1 cars at slower speeds.

When you look at the 2022 F1 season, Mercedes F1 team have not been at their best.

The eighth constructors’ champions have been bogged down by issues such as bouncing and porpoising.

At the French GP, the silver arrows are bringing upgrades to the car. It is expected these upgrades will help the team close the gap to the front runners.

The development path they have taken indicate they are able to extract performance from the car.

It will be interesting to watch how W13 performs at the Paul Ricard, and later at the Hungarian Grand Prix.

Speaking to the media, Mercedes F1’s team principal Toto Wolff confirmed that the team would add more developments to their racing car at the French GP.

“While we were quicker in Austria, we still weren’t quick enough to challenge at the front. We need to keep chasing those final few tenths and bringing new developments to the cars, including this weekend in France.” – Toto Wolff

As the team closes in on Red Bull and Ferrari, it is providing a great opportunity for the fans to enjoy more cars fighting for podiums.

Both Lewis Hamilton and George Russell look ready to pounce as soon as they get a car that can win races.

Background of F1 Racing in France

France has a rich history of racing, and French Grand Prix in 2022 is part of this historical journey.

It is the first country to host a motor racing event. The first race took place in 1894, and was a Horseless Carriages Contest from Paris to Rouen.

This race was organized by the Automobile Club de France (ACF). Count Jules-Albert de Dion won in his steam-powered car in just under seven hours.

French Grand Prix would return to France on 26th June 1906. It was an event that was held on public roads near towns such as Le Mans, Dieppe, Amiens, Lyon, Strasbourg and Tours.

Included in the first year of the F1 World Championship in 1950, the French GP took place at the Reims-Gueux Circuit.

This race was won by Maserati’s Juan Manuel Fangio.

Most Successful F1 Drivers and Teams at French GP

Home fans were treated to six wins by Prost, while Monegasque driver Louis Chiron won on French soil five times, though none were part of the F1 World Championship.

As for constructors, Ferrari lead the way with 17 wins, though their last triumph in France dates back to 2008.

Williams have eight victories, while Mercedes and Lotus have both won seven times.

Formula one racing has a long history in France. This includes producing popular F1 drivers.

As you plan to attend the French Grand Prix this year, it would be great to know former French F1 drivers.

This would provide you with information you can use to start conversation with fellow F1 fans.

Former F1 drivers from France include;

One of the most popular French F1 drivers is Alain Prost.

Why is Alain Prost Nicknamed Professor?

Prost employed a smooth and relaxed style behind the wheel.

He deliberately modelled himself on personal heroes like Jackie Stewart and Jim Clark.

He was nicknamed “The Professor” for his intellectual approach to competition.

So, how many French drivers are in F1 today?

In the current grid, there are two French formula one drivers. The two drivers are;

As you can imagine, they are working hard to win races and secure points in the drivers’ and constructors’ championships.

Pierre Gasly is a French Formula 1 driver, who was born in Rouen in 1996.

Pierre is currently driving for the Italian racing team, Alpha Tauri. His teammate in this F1 team is Yuki Tsunoda.

Esteban Ocon was born in 1996 at Evreux, Normandy in France, and one of the drivers taking part in the French Grand Prix in 2022.

He is currently driving for Alpine F1 team, alongside the former world champion Fernando Alonso.

In the past, he has driven for Force India and Renault.

Which F1 Teams are Based in France?

When you think of the F1 teams in France, Renault F1 team comes to mind.

However, the team was re-branded to BWT Alpine F1 team, to promote Renault’s sports car brand.

Alpine F1 team continues to be the Renault’s works team.

In conclusion, French Grand Prix is currently being held at the Circuit Paul Ricard in the France.

This is a venue that has always produced great formula one racing experiences.

In 2021, there were great strategic pit stops by team that saw Red Bull’s Max Verstappen retake the lead from Lewis Hamilton towards the end of the race.

As the season progresses, it is important to win at this grand prix venue.

The driver and team can score points towards the constructors’ and drivers’ championships in 2022.

As you plan to attend the F1 race at Paul Ricard, I hope this information has provided you with basic knowledge about the venue for the French Grand Prix.

This promises to be an exciting race.

Let us hope it will live up to the hype as Red Bull, Ferrari and Mercedes fight for top positions.

Watching the top three teams competing at Silverstone during the British GP was exciting.

French GP should provide same entertainment in the sport this season.