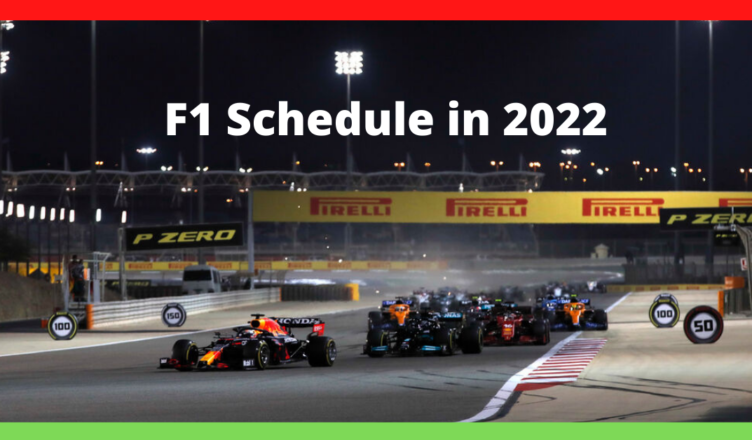 It is another long formula one season. With 23 races scheduled, the 2022 F1 season is intense and long. You are going to have very interesting race weekends. If you are wondering how the F1 race schedule in 2022 looks like, you are in luck today.

The F1 race schedule in 2022 starts in Bahrain in March, and ends in Abu Dhabi in November.

Related: How Many Teams are in Formula 1?

Finishing in November is the earliest an F1 season has ended in over a decade. When you consider that there are 23 races, this is a big win for F1.

It is expected that the season is going to produce close racing and battles on the track. That is what the new generation of cars and regulation changes should provide.

Competition has lacked in recent years, and the new changes in 2022 should provide an opportunity for increased competition between teams.

The title battle between Mercedes and Red Bull was entertaining to say the least. To imagine that we can have more close battles this year is mouth watering.

F1 race schedule in 2022 is tight, and has back to back races in July and October. You are going to enjoy the season this year.

If you are planning to attend any of the formula one races in 2022, you will find this schedule very helpful.

One of the new races in this F1 2022 schedule is the Miami Grand Prix. This will take place on the first week of May in 2022.

The unveiling of a 23-race calendar by F1 for the 2022 season can be considered ambitious.

It is important to note that in 2021, a similar schedule had been planned. However, a number of races were cancelled due to travel restrictions.

While this is not expected in 2022, you should not be surprised if some of the races are dropped off.

Already, the Chinese GP is not part of this F1 race schedule in 2022. This is despite the grid having the first ever Chinese driver in formula one in Guanyu Zhou.

With 23 races scheduled for the F1 season in 2022, completing the season would break the record. It would history of the most races held in a single season.

While you have one new grand prix joining the schedule, a number of others are set to return to the calendar after a two season break.

These include races in Australia, Singapore, Canada and Japan. Chinese Grand Prix will not take place this year.

However, F1 has extended its contract with the Chinese Grand Prix, in a move that will keep the championship visiting Shanghai until 2025.

Formula 1 made its debut in China at the Shanghai International Circuit back in 2004, with Rubens Barrichello winning the inaugural race for Ferrari.

Related: Which F1 drivers are confirmed for 2022?

The Bahrain GP will once again kick off the season, on March 20, followed the weekend after by the Saudi Arabian GP, which is making its debut as the penultimate race of the 2021 campaign at a new Jeddah street track.

Miami Grand Prix entry into the F1 Race Schedule in 2022

F1 then hopes to return to Melbourne’s Albert Park for round three after two years without an Australian race, having typically gone there for the season opener.

The Emilia Romagna GP at Imola, which has thrown up exciting races since returning to F1 in 2020, is next before the inaugural Miami GP and a race around the Hard Rock Stadium, home of the NFL’s Miami Dolphins.

The European season then starts in earnest with May’s traditional Spanish and Monaco GPs, the latter now a normal three-day format, before an Azerbaijan-Canada double header as the sport heads to Baku and Montreal. The British GP is on July 3.

There are two triple headers scheduled for after the summer break, the first in Europe in Belgium, Netherlands and Italy – as we saw this year – and the second in Russia, Singapore and Japan.

The popular Singapore and Japan races, at Marina Bay and Suzuka, haven’t taken place since 2019.

The season then heads into a title run-in with back-to-backs in Austin, USA and Mexico, and Brazil and Abu Dhabi to finish the campaign.

F1 2022 is set to finish on November 20, the earliest end since 2010 as the campaign concludes a day before the start of the football World Cup in Qatar.

A Qatar race, although on the calendar this year with an F1 debut, is absent from 2022 before a 10-year deal begins the season after.

While the sprint races received positive feedback when they made their debut in the 2021 season, none has been schedule in 2022 so far.

When you look and analyze the F1 race schedule in 2022, you will realize that there are no sprint races in the season.

However, this might change as F1 announces the dates and venues for the sprint races this season.

The formula one teams competing in the 2022 season are;

These are the teams that will be competing for the constructor’s championship this year.

Porsche, which is part of the Volkswagen Group has been toying with the idea of joining formula one. Discussions with FIA are still continuing and final decision will be made in due course.

I do not think you will see or watch Porsche F1 in action this year.

In conclusion, the F1 race schedule in 2022 is what you and I have been looking forward to for a while now.

The formula one race schedule in 2022 has many races, across continents and a new generation of formula one cars.

When combined with rule changes as well as budget caps, it promises to be very exciting.

I do not know about you, but I am excited with this year’s F1 race schedule, and so far so good.

It is exciting to see the entry of Miami Grand Prix into the calendar. This means that United States of America has two F1 races on the calendar in 2022.

Related: 3 Reasons Why Miami GP is Worthy on F1 Calendar

At the end of the year, you will look back and get an answer to the question; will this long F1 season work in 2022?