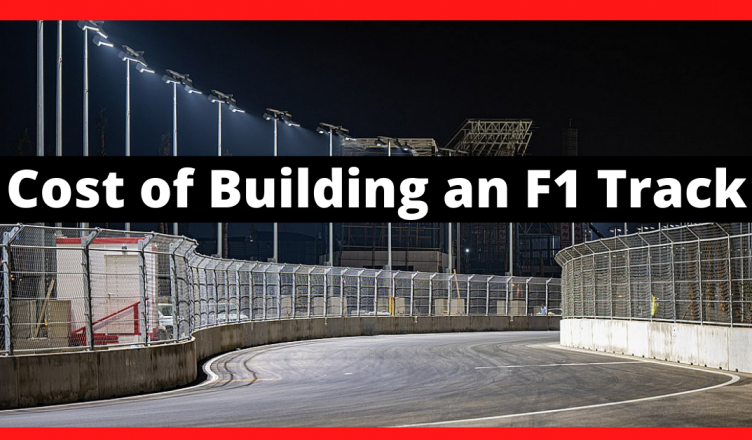 Watching Formula 1 racing is fun and enjoyable. It takes a lot of work to create the circuits. You might wonder; how much does it cost to build an F1 track?

As they say, there is nothing like holding a Grand Prix on the cheap. It costs money to host an F1 race.

One of the major components of a Formula 1 race weekend is the track or circuit. You cannot have F1 cars racing without the track.

But how much does it cost to build the formula 1 track?

In this article, I will share with you the details of how much money it costs to construct an F1 track.

You will learn and understand the cost of setting up a functional formula one racing track.

This includes all the associated infrastructural developments and installations.

As you will find out, constructing or building an F1 track costs a sizeable amount of money.

How Much Does It Cost to Build an F1 Track?

Building a formula one track is estimated to cost between US$270 million and US$1.5 billion.

This amount includes everything that would be required to make the circuit functional during a race weekend.

Among these is the track itself. It costs an estimated US$50 to US$70 million to build a racing track alone.

The actual cost of constructing an F1 track depends on the location or country.

In some countries, the cost can be on the lower end of the spectrum.

However, in some countries, the cost of building an F1 track can be very high.

For example, the cost of building the Circuit of Americas in Austin is between $250 million and $300 million.

Cost of Building a Formula 1 Circuit

Having a track is one of the requirements to host an F1 race. It is rather obvious, right?

But how much is the cost of building an F1 track?

To have a fully functional track, it costs an estimated US$270 million. However, the costs of building a track can also escalate to over US$1 billion as was the case for the Abu Dhabi track.

Yas Marina in Abu Dhabi cost a whooping US$1.3 billion to construct. It is the most expensive F1 track to date.

But where does the money go?

How much does it cost to build the track facilities?

In a nutshell, the cost of building a track goes to the following categories;

As you can see, building a track involves quite a bit of work. you need all the above facilities to ensure the smooth running of a race weekend.

The costs of constructing a tracks varies depending on whether the track is permanent or temporary.

Running Costs of an F1 Track

While building a track for the formula 1 racing is costly, running costs are also not cheap.

Once the track is complete and commissioned, there are expenses associated with maintaining it.

Running cost of an F1 track include;

At a total cost of around $16 million, staffing is the biggest single expense for operators of street races with the budget for the marketing and organisation team alone coming to around $6.5 million.

Next is rental of grandstands which costs around $14 million for structures with 80,000 seats.

Securing a 3.2-mile street course with safety barriers and fencing costs in the region of $8 million which is also how much it costs to rent the pit buildings.

Vehicle, office and utilities payments are around $6 million with a further $4.5 million of miscellaneous costs.

Capping it all off is a payment of around $1 million for insurance.

How Much Did the Abu Dhabi Track Cost to Build?

One of the most prestigious formula one track on the calendar is the Yas Marina in Abu Dhabi.

It is arguably the most expensive F1 track to ever be built.

The construction of the Yas Marina costed US$1.344 Billion. No expense was spared to build this purpose-built facility in the capital of the United Arab Emirates.

Yas Marina is usually the final race of the year, and has seen some great season finale races.

The most recent one is the controversial ending of the 2021 season. Max Verstappen won the race, and with it the drivers’ championship.

Many formula 1 fans still believe that Lewis Hamilton was robbed his eighth championship.

In conclusion, construction of the track or circuit is a step towards hosting an F1 race.

There are many countries that are showing interest in hosting a formula one race.

However, building an F1 track can be very expensive.

As you have seen above, to have a track or a circuit that meets the high standards of motor racing requires a substantial investment.

Some countries have tried and failed. You can find tracks that are no longer in use across the world.

It all comes down to finances, and how the formula one makes money.

Related: How Does Formula One Make Money?