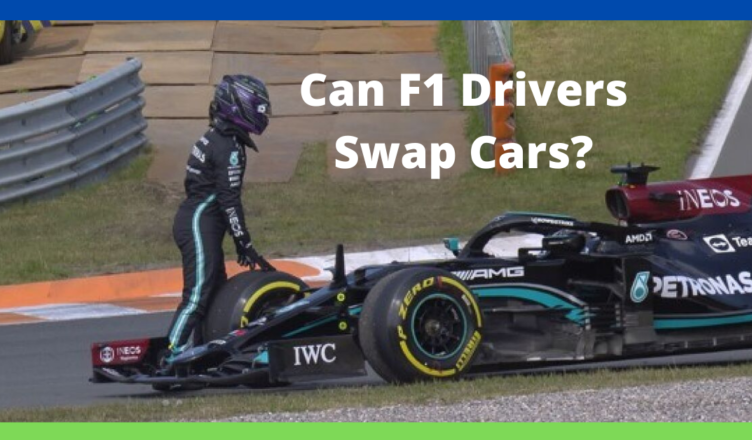 I am in my home office, sipping some whiskey as I think about the upcoming formula races. I cannot help but wonder, can two f1 drivers swap cars if needed?

Give me a minute…I know what you might be thinking.

Is this even possible? Can two formula one teammates swap cars and get away with it?

It is an idea I have been entertaining, and want to share it with you for a discussion. You might have your own thoughts on this as well.

The concept of swapping cars is not new in the world of motorsport. In fact, it is as old as the sport goes. Looking at history, you will be shocked at how well this idea worked and produced winners.

Two formula one drivers can swap their cars if needed, but within a team. While there might be no rule stopping this practice, it is not common in F1.

The closest I can think of two F1 drivers swapping cars is when Hamilton and Bottas swap their chassis. It is something they do every season as part of how Mercedes F1 team works.

This is an interesting question, and the truth is it has happened in the past.

What I am not sure about is whether it can be allowed today. To see F1 teammates swap cars is not common.

However, if an F1 driver is unavailable for any reason, the team is allowed to replace him with another driver. In most cases, this is usually their reserve driver.

A team can also replace an absent driver with another from their sister company. For example, George Russell of Williams replaced Lewis Hamilton of Mercedes during Sakhir Grand Prix.

This was a case of a driver being in the cockpit of another driver’s formula one car.

Swapping Cars during a Formula One Race

On the race track, there are instances when drivers can swap cars, but that is only swapping track positions.

This is when the team orders their drivers to do so. It is common to hear team orders when a team is fighting for constructors’ or drivers’ championship.

It is also possible to swap cars on the track when there is a significant performance difference.

You might have witnessed Mercedes or Ferrari issuing team orders to their drivers.

Related: What are Team Orders in F1 and Does it Swap Cars?

This shows that two f1 drivers can swap cars if needed on the track.

The team will then order their drivers to rearrange themselves on the track so as to give more championship points to a driver who is ahead in the championship.

There have been suggestions of two f1 drivers swapping cars. it has come from an f1 driver.

Red Bull’s Max Verstappen has in the past said that he would be willing to swap cars with Lewis Hamilton.

He would do this to prove that he is the faster f1 driver.

While many F1 fans would wish to see such a swap, I do not think it is going to happen anytime soon.

The closest we can get to having Verstappen and Hamilton racing in the same machine was if they could be on the same F1 team.

It is the kind of banter than can excite some. However, at the moment the idea of these two f1 drivers swapping cars remains just that, an idea.

In conclusion, I am not sure there is a specific rule that governs if two F1 drivers can swap cars if needed.

However, in Formula E, FIA has regulations on how car swaps can or should be handled. This is important to ensure safety standards are maintained.

The question of whether two F1 drivers can swap cars if needed is something I am interested in for a number of reasons.

To throw in a spanner in the works, Bottas has already changed engine and his car has taken the grid penalty associated with that. In fact, he did it twice. First at Monza, and then at Sochi.

My question would be can he swap cars with Lewis Hamilton now? Would it be wrong to sort of exchange the cars and have cars set up changed to fit their driving styles or preferences?

I know you understand why I would ask this question. To be honest I do not think whether it would even be allowed.

Recommended: Do all F1 Drivers Come From Rich Families?