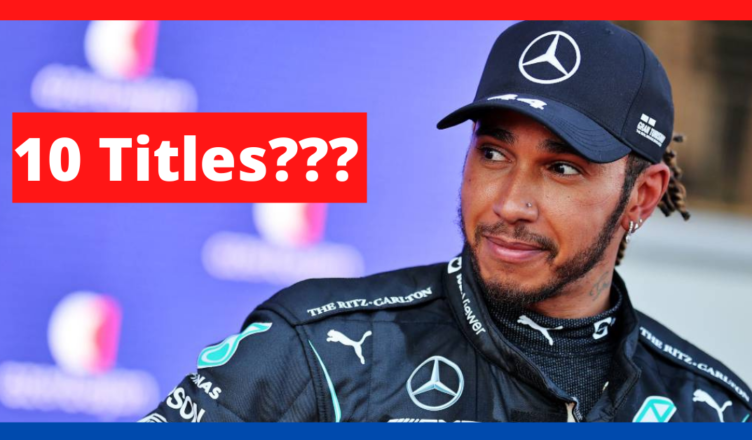 Formula One has come a long way, and so have the drivers. Lewis Hamilton has been the most successful driver in F1 to date, with seven drivers’ title championships under his belt. This could be the reason many are wondering; is it possible for Lewis Hamilton to win 10 titles in formula one?

It is easy to see why you might also want to know that.

At some point no one ever thought an F1 driver would break or surpass Michael Schumacher’s records.

Hamilton has now broken all, and is level with him on championship. It is possible that with a contract that ends in 2023, you will witness Lewis winning more championships.

Lewis Hamilton joined Mercedes in 2013 from McLaren. He had won his first title in 2008 with McLaren. At that time, Red Bull were the dominant team in formula one.

In fact, Red Bull had just won the fourth straight drivers’ and constructor’s titles with Sebastian Vettel as the driver.

In his first season, Hamilton managed to win only one race with Mercedes.

However, a switch to hybrid engines turned F1 on tis head. Hamilton has won every title with Mercedes since 2014.

The only exception was 2016 when his team mate Nico Rosberg clinched the drivers’ title and retired.

Over the years, Hamilton has proven to be a great and very successful formula one driver. It is the reason you might also join those wondering; is it possible for Lewis Hamilton to win 10 titles?

Let us continue to discuss this.

Is it Possible for Lewis Hamilton to win 10 F1 titles?

Realistically, Lewis Hamilton can win 10 formula one titles. It is possible for Hamilton to win the 8th, 9th and 10th drivers’ championship in under three years.

Lewis Hamilton can possibly win 10 F1 titles. This means winning in 2021, 2022 and 2023 consecutively.  His current contract with Mercedes expires at the end of formula one season in 2023.

Titles that Hamilton has won So Far

As at today, Lewis Hamilton has won seven world drivers’ championship in formula one.

He is considered the most successful driver in the history of F1. It takes a special kind of a driver to secure 7 titles.

Related: How Many Championships has Lewis Hamilton Won?

It has been a journey, and that has included facing stiff challenges from drivers such as Nico Rosberg and Sebastian Vettel.

While a lot of people think he will win his eighth championship in formula one in 2021, it does not look that easy.

For a while now, Lewis has not had a challenger for the title. However, the surprise performance of Red Bull, and Max Verstappen is changing the dynamics.

The 2021 season has provided the best title fight the sport has lacked for a couple of years.

Max Verstappen is a possible champion and he could even win his first drivers’ championship this year.

He has the desire, skills and the machine to take the fight to Hamilton and Mercedes. The fact that he is ahead of Hamilton at the moment proves he is good.

It is expected that the title this year will swing back and forth between him and Lewis Hamilton.

Towards the end of the season, Mercedes seem to have found extra straight line and slow corner speed. This might be a key thing in deciding the winner of the 2021 F1 season drivers’ champion.

While it is not clear where Mercedes has gotten the speed from, there are murmurs that smart engineering is helping them.

With the recent contract extension, Lewis Hamilton will drive for the Mercedes team until 2023.

This provides him with an additional two F1 seasons to add to his championship titles.

However, with the changes to the F1 racing, there are a lot of unknowns in terms of which team will adapt best.

If Mercedes continues to dominate the field, it will increase the chances for Hamilton to win 10 titles.

In conclusion, winning 10 formula one titles for Lewis Hamilton is a possibility. It could happen over the next two or three years.

It would be a record, and the first time a formula one driver winning so many drivers’ title.

Is it possible for Lewis Hamilton to win 10 titles? The simple answer is yes. It is possible to Lewis to win his 10th formula one drivers’ championship title by 2023.

This means he wins the current 2021 season, and dominates in the next two F1 seasons. On this you are looking at him winning both the 2022 and 2023 championships.

It is a tall order, but it is doable.