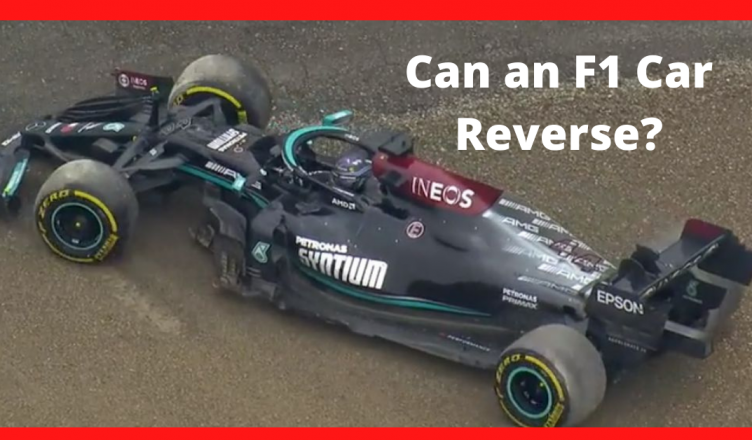 Formula one is known for high speeds, great overtaking and high drama on the track. In all these situations, the formula one car is always moving forward. This begs the question; can a formula 1 car reverse?

When learning how to drive, one of the lessons involves driving the car in reverse.

It is an important driving skill to have.

As a driver, you will be required to drive in reverse or use the reverse gear to get out of a tricky situation. That is life.

If you are an F1 fan, you might be interested to know whether a formula 1 car can reverse.

What happens when a drivers gets into the sand, gravel or makes a wrong turn?

Can a formula one car reverse out of that situation?

In this article, you are going to learn about reverse gear in formula one. You will also learn whether formula one cars can reverse.

Can a Formula 1 Car Reverse?

The simple answer is that a formula one car can reverse. It is equipped with a reverse gear to make reverse manoeuvres.

All Formula 1 cars have a reverse gear because the FIA stipulates it. It is up to the teams to keep the gear functional and the drivers to practice reversing the car.

While there are set rules about reversing in the pit lane or on the track, these rules have to be read in conjunction with the rules on safe driving.

Now that I have answered your question, do not leave as yet.

I would propose that you continue reading to understand how reversing works in formula one.

You will also get additional information on cases when drivers have been forced to reverse during a race.

In conclusion, it is important to note that formula one cars can actually reverse.

According to the rules, all formula one cars must be equipped with a reverse gear. There are directives on how to reverse at the pit lane and in other areas as well.

Ultimately, the drivers must always make moves or drive their cars with safety in mind.

It is not common to find F1 cars using the reverse gear. However, it is very important as various situations have proved.

Without the reverse gear, a number of F1 drivers would have retired from the races.

For example, Hamilton was able to reverse his Mercedes F1 car and continue to race at Imola in 2021.

He went on to finish second to Max Verstappen who won that race.

As you can see, if he had not managed to reverse from the gravel at the hairpin, he would not have retired from the race.

Can a formula one car reverse?

In a nutshell, a formula one car can reverse and has a reverse gear mechanism.